By Alex Weir - August 04, 2017
It was August 4, 2007. Exactly ten years ago to the day. Alex Rodriguez had been sitting at 499 career home runs for over a week, and the wait for number 500 was growing tedious. He had gone a career worst 22 at bats without a hit following the home run, and it wasn’t until a single on August 2 that this streak was broken. Now, two days later, on a Saturday afternoon in the Bronx, A-Rod stepped up to the plate against Kansas City Royals starter Kyle Davies, and delivered a moment that not many Yankees fans will ever forget. 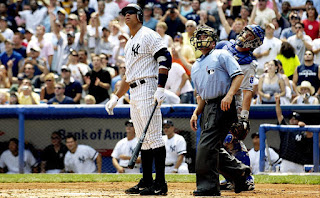 With this home run, A-Rod became the youngest player in baseball history to reach the milestone, at 32 years and eight days. He surpassed Jimmie Foxx, who was 32 years and 338 days old at the time of his own 500th homer. It also only took him 1,855 games to reach it, which is third least in major league history, behind just Mark McGwire (1,639) and Babe Ruth (1,740). He’s the third player to accomplish this feat as a Yankee, joining Babe Ruth and Mickey Mantle.

For me, personally, this day was more than just the day of A-Rod’s 500th home run. It’s also the ten-year anniversary of the first time I ever attended a Yankees game, and will forever be one of my favorite moments as a Yankees fan. I happened to be at the game by luck as well. My parents had bought the tickets to the game weeks beforehand, but hadn’t bothered to look at them too closely. However, once we arrived at the Stadium, we realized that the tickets were actually for the game on August fifth, not fourth. However, my parents and I decided to buy three more tickets for the game that day, since it would’ve been pointless to drive all the way back home with nothing to show for it.

We had just barely gotten settled in our seats when A-Rod’s first at bat took place, and the second the ball landed in the seats is a memory that I will never forget.