What to make of Gary Sanchez's recent struggles

By Unknown - August 11, 2017
Almost immediately after his call-up last summer, Gary Sanchez ignited the youth movement that has come to define the New York Yankees ever since. Sanchez put up otherworldly numbers during his rookie campaign, making a viable case for Rookie of the Year despite having played in only three Major League games prior to August 2016. In 2017, however, Sanchez has provoked the ire of many Yankees fans. Though his offensive numbers are well above average, his play behind the plate has been mediocre at best. It also appears that Sanchez doesn't have the right attitude, as is evidenced by his lack of hustle down the line, for example. Make no mistake about it, Gary Sanchez will be the Yankees' catcher for years to come, but that does not exclude him from some much earned criticism. 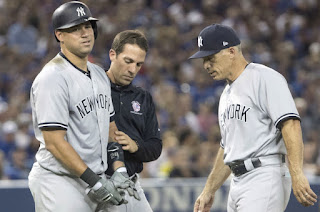 Despite spending almost a month on the disabled list early in the season, Sanchez still managed to make the AL All-Star team. Statistically, the young catcher is having an above average season with the bat. As of Friday morning, Sanchez is hitting .266 with 18 home runs, 53 RBIs, and a .344 OBP. When factoring in the time he missed due to injury, it's difficult to not be satisfied with his performance thus far. As usual, however, statistics do not tell the whole story.

On a team that has struggled immensely with runners in scoring position, Sanchez is hitting .270 with six homers and 35 RBIs. Once again, the stats seem to imply that Sanchez has for the most part picked up where he left off at the conclusion of 2016. Lately, on the other hand, he's apparently shifted to a "swing for the fences approach" with runners on base. Sanchez may be a power hitter, but along with most of his teammates, he must learn the utility of situational hitting.

The problem with Sanchez could be his attitude. Defensively, Sanchez has been downright awful, and that characterization is not meant to be hyperbolic. Having made an alarmingly high 11 errors and allowed a league leading 12 past balls this season, Sanchez looks lost behind the plate at times. The cannon of an arm that he used to nail down opposing runners in 2016 and earlier this season, has not been on display as of late. It's gotten so bad that manager Joe Girardi, a former catcher himself, made the decision to bench Sanchez for a game in Cleveland this past weekend. Granted, one game does not really qualify as a "benching" per se, but the skipper was surely trying to send a message to his young catcher.

With Matt Holliday currently on the DL, many fans have called for Sanchez to get a majority of his playing time at DH, which would allow for the defensively-minded Austin Romine to become the regular catcher. Romine has excelled in his backup role, and even performed quite well when given extended playing time, but for the future of the organization, the Yankees must give Sanchez time to solve his defensive issues. It is he, not Romine, who the team envisions as the starting catcher for years to come. The fact that this conversation is even being had is a testament to just how worrisome Sanchez's defense has become.

As of late, Sanchez has been working closely with both Girardi, and first base coach Tony Pena, another former catcher, on improving his defense. It's worth noting that Sanchez has been with the Yankees organization since he was sixteen years old, signing a deal in July 2009. In 2011, when he was only eighteen years old, the Yankees gave their top prospect a wake up call. Sanchez was demoted from Low-A Charleston for circumstances referred to as "attitude problems." The issue seemed to have stemmed from discontent derived from having to split playing time with John Ryan Murphy after getting off to a slow start. 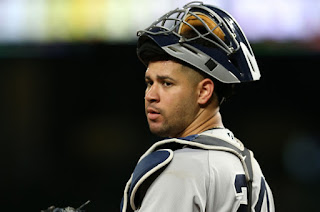 For all intents and purposes, Sanchez successfully turned the aforementioned incident into a learning experience. He's worked his way up to become the starting catcher for the Yankees, so obviously he did something right. Are we witnessing a bit of an attitudinal regression from Sanchez? Maybe. But, most likely not.

Publicly, Sanchez has done all the right things to confront his struggles. He's owned up to his mistakes and expressed a desire to get better. He's working hard on a daily basis to return to his 2016 form. He's an extremely talented player. We can only hope it's a matter of time before Sanchez figures it out.

It's amazing how quickly Sanchez has transformed from a player who could do no wrong in the eyes of Yankees fans to the subject of their scorn. He has done so by making costly mistakes on a rather consistent basis. The only way for Sanchez to return to the former status is to resume his production, from both an offensive and defensive standpoint.

Ask any of my colleagues here at the BBB. I'm as alarmist and pessimistic about this ball club as any rational human being can be. With Sanchez, however, there's plenty of reasons for optimism. At only 24-years old, Sanchez is still on a learning curve. As a power hitting catcher with the potential to become an elite defender, the Yankees have a special talent behind the plate. It's only a matter of time before he puts it together. This season is yet another step in Sanchez's development. There's no reason to believe he won't evolve into the perennial All-Star he's capable of becoming.