Yankees falter with RISP yet again, shut out by Blue Jays

By Unknown - August 10, 2017
A night after an offensive explosion where the Yankees scored 11, they come back and struggled against the ever mediocre Marco Estrada. Estrada seemingly always has the Yanks number and tonight was no different. Early on they had the extra base-hit stroke, starting off the game with three doubles over three innings, but the issue that has been looming over the Yanks for weeks now with runners in scoring position came back to haunt them, ultimately going 0-9. 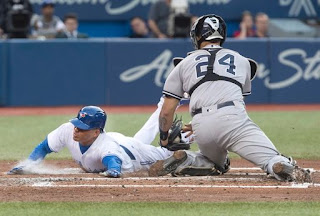 The offense left countless opportunities wasted, leaving 11 runners on base while also getting shut out. The real positive about the game was how Sonny Gray pitched. Going six strong allowing only two earned. The pitching staff kept them in the game, while the offense continues to falter in the long run.

Sonny Gray was strong for the Yanks, but he definitely battled. He struggled to get the key outs, while also throwing one into centerfield during a pickoff attempt which would allow Ezequiel Carrera to advance to third. He would later score on a fielder's choice making it 1-0. The next inning, Josh Donaldson would drive home Jose Bautista for the game’s second run. In the fourth, the Blue Jays would tack on another run making it 3-0 thanks to a Kevin Pillar RBI single. Finally in the seventh inning Bautista took Chasen Shreve deep to left for a two-out solo homer. 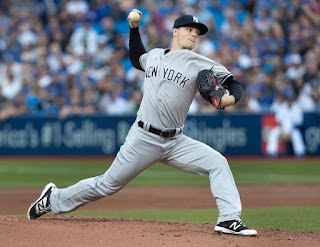 As the Yankees offense gets shut out, the pitching stayed strong. Sonny Gray showed up for his second start with his new team and continued to show how valuable he will be down the stretch, but unfortunately for him and the Yanks, the team needs to score to win. The Yankees lose the rubber match of this series 4-0. New York goes back home to the Bronx to face off against two of their biggest rivals, with a weekend series against the Red Sox, and then a home and home four game set with the crosstown rival Mets. The Yankees subsequently go on the road for a three game set in Boston the weekend after.

Tomorrow night’s series opener against the Boston Red Sox has Eduardo Rodriguez (4-3, 4.08 ERA) against Jaime Garcia (5-8, 4.49 ERA). The game’s first pitch will be roughly around 7:05 on YES and MLB network.