By Unknown - August 06, 2017
This morning, the Yankees officially placed their struggling DH, Matt Holliday, on the 10-day disabled list due to a lower back issue. The 37-year old, signed to a one-year contract this past offseason, has struggled immensely since being activated from an earlier DL stint. Holliday, whose performance paid dividends earlier in the season, has been a shell of himself during the second half. Since outfielder Aaron Hicks, currently on a rehab assignment, is not yet ready to be activated from his own DL stint, the Yankees have recalled Garrett Cooper to take Holliday's spot on the roster. 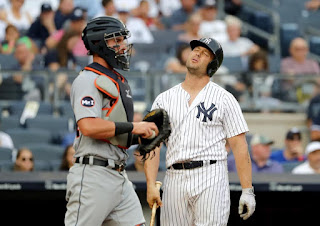 For the first few months of the season, Holliday appeared to be yet another brilliant move made by GM Brian Cashman. Signed to a one-year deal for only $13 million this past offseason, Holliday became not only a force in the middle of the lineup, but also a leader in the clubhouse. In the first half, Holliday hit .262 with 15 home runs and 47 RBIs. In fact, had it not been for his first stint on the DL, Holliday may have been able to land a spot as an All-Star reserve.

Since his return from the DL following the All-Star break, Holliday is 11-81 (.136), with only one home run. Holliday clearly still has the talent to play on a Major League roster, as is evidenced by his first half performance. The Yankees are hoping Holliday can return from this DL stint at some point late in the season, and help in playoff push. If there's anything left in the tank for the 37-year old DH, we'll surely find out by year's end.

Acquired by the Brewers for reliever Tyler Webb, Cooper played moderately well in his short stint in the Majors before being optioned to Triple-A, going 6-26 (.240) and playing a good defensive first base. We should expect Cooper to get some playing time at first when Chase Headley is need of rest (which seems to be not too often), or even some starts at DH on occasion.

It's hard to believe that Holliday completely forgot how to hit over the past few months. It is likely that this lower back injury contributed to the recent struggles. In Holliday's absence, the Yankees will likely use the DH position as a platoon of sorts, rotating between one of the outfielders, especially when Hicks returns, and Gary Sanchez, the latter of which would allow the defensively superior Austin Romine to get starts behind the plate over the young star who has struggled to field his position this season.