By Unknown - September 04, 2017
Coming into the 2017 season, there were many questions surrounding Chase Headley. With an All-Star caliber year in 2012, many people were waiting until that Headley came to bat for the Yankees. In 2016, he had a pretty mediocre season as he batted .253 with 14 home runs and 51 RBIs. After starting off the 2017 campaign as hot has he did, Yankees fans everywhere were getting their hopes up to believing that maybe the 2012 Chase Headley was back to stay. 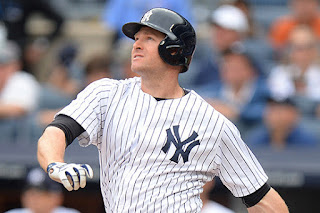 In the month of April, Headley was surging as he hit .301. The hopes were very high for Headley and the Yankees as they were in first place in the AL East at month's end. A cold May for both the Yankees and Headley destroyed those hopes very quickly. Fast forward two months and Headley is debatably the most trusted hitter in the Yankees lineup as of late. The acquisition of Todd Frazier, which moved Headley to first base, quickly became a “great” move as Headley stayed consistent and Frazier gave the offense another power bat. With Greg Bird coming off the DL, Headley was moved back to third base, which placed Frazier on the bench. With the three now available, Joe Girardi is doing all he can to get Headley in the lineup every day, with the other two swapping games here and there.

This sudden burst of playing time has been most likely due to the fact that Headley has had a renaissance himself. In what will turn out to be his best year as a Yankee thus far, Headley has really been a key contributor in helping the Yankees win day in and day out. His statistics so far really speak for themselves. Headley is hitting .280 with 11 home runs and 54 RBIs. With Headley so hot as of late, there isn’t a question about whether he should be playing everyday on either corner of the diamond. Granted, Headley is having a pretty average year in the field, but his offense is really something to watch. 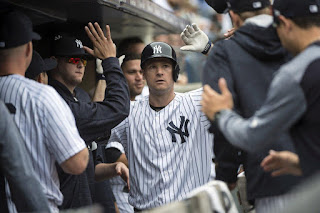 With the Yankees coming down to the wire in the division and the wild card, Headley will be a consistent force in the lineup. He has recently been batting up in the order, and with the injury to Hicks, he'll likely contribute to get at bats from the two-hole. With lots of baseball still left to play in September, it will be very interesting to see if Headley can continue his hot streak. Overall, the Yankees wouldn’t in the position they are in today without the major contributions of Chase “Head” Headley.