By Unknown - September 23, 2017
Technically, the Yankees are still in the hunt for the AL East title, sitting four games behind the Boston Red Sox with nine games to play. Realistically, however, the Yankees are cognizant of the fact that they will more than likely be playing in this year's American League Wild Card Game. Bearing this strong possibility in mind, I've decided to put together what I identify as the best lineup the Yankees can field against their potential opponent, whether it be the Twins, Angels, or Rangers. In all likelihood, the lineup I'll soon articulate will not match the one Joe Girardi trots out on October 3rd. However, it would be the best lineup, under the circumstances, the Yankees can concoct in a one-game playoff. 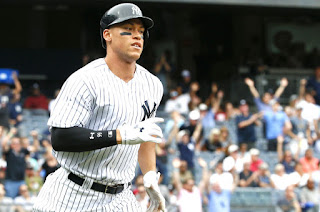 I'm not even going to attempt to guess the number of different lineups Girardi has put together this season. That being said, the one constant in a vast majority of those lineups is Brett Gardner's presence in the leadoff spot. Though a plausible argument can be made that the red hot and resurgent Jacoby Ellsbury might be a better option to lead off at the moment, Girardi will not move Gardner down in the order. As has been the case for most of his career, Gardner predictably cooled off in the second half of the season. His numbers are still more than respectable.

Gardner has been a reliable leadoff hitter this entire season, and there's no reason to think Girardi will change that in the most important game the Yankees have played in two years.

Perhaps one of the most pleasant surprises this season for the Bombers has been the resurgence of Chase Headley. Just when his four-year, $52 million contract began shaping out to be one of Brian Cashman's more regrettable moves, Headley responded by doing his best to prove the haters wrong. Despite having an utterly putrid month of May, Headley has rebounded to transform into one of the few consistent presences in the Yankees lineup. Because of his ability to switch hit, and get on base to set the table for the power hitters below him, Headley is a solid choice for the number two spot.

A few months ago, I couldn't have predicted that I'd be advocating for Headley to bat in a key spot in the playoff lineup. Now, it's pretty obvious that he deserves it.

Penciling Judge into the middle of the order will be one of Girardi's easier decisions when it comes to setting his Wild Card Game lineup. I'm fine with Judge batting third or fourth; however, the Yankees skipper has shown an inclination to hit Judge third more often than cleanup. Having Gary Sanchez's power bat behind him in the lineup will negate the possibility that opposing pitchers completely pitch around Judge.

The likely AL Rookie of the Year, and potential MVP, will have his opportunity to make history in the postseason for the Bombers in his first full campaign with the team. Considering this game will probably be played within the friendly confines of Yankee Stadium, Judge will look to feast off of the opposing team's pitchers in his first playoff game. 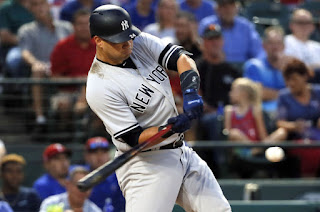 If Judge is batting third, then Sanchez has to hit fourth. Sanchez has had such a tremendous season that it's hard to remember he spent nearly a month on the disabled list to begin the season, after suffering an injury during the Bombers' second series of the year in Baltimore. Needless to say, Sanchez is the best power hitting catcher in baseball. Judge and Sanchez batting consecutively will form a lethal duo in the middle of the lineup for the Bombers, striking fear through whomever the opposing pitcher happens to be.

Having recently broken the record for most home runs by a Yankees shortstop in a single season, Gregorius has continued to prove to Yankees fans that he's the real deal. One of the Bombers few left-handed power threats, especially with the short porch in rightfield in the Bronx, Gregorius is the perfect fit for fifth in the batting order. Since it wouldn't make much sense to break up Judge and Sanchez, even though they are both right handed hitters, Gregorius will slide nicely into the five hole. Don't worry, if the rest of the lineup does its job, Didi will have more than enough RBI opportunities.

Gregorius, along with Headley, have been the Yankees two most consistent hitters this season. Despite missing the first month of the season due to an injury suffered during the World Baseball Classic while playing for his native Netherlands, Gregorius has put together the best season of his career. The clutch shortstop will look to make an even more impressive postseason impression. 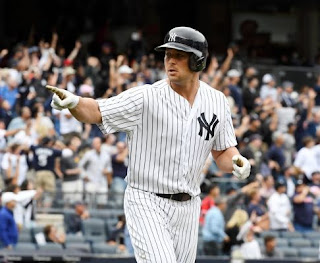 This is likely where I'll catch the most heat from our readers. Some may want to start Greg Bird, especially because he seems to have gotten on a bit of roll over the past few weeks. That's certainly a comprehensible argument, but in my opinion, not the best one. Situations like the Wild Card Game are precisely why the Yankees gave Matt Holliday $13 million this season. In a lineup bereft of players with extensive postseason experience, with the exceptions of Ellsbury and Gardner, having Holliday's veteran presence and composure could make all the difference in the world between a win and a loss.

Holliday got off to an amazing start before coming down with a stomach virus, and having subsequent stops on the disabled list. Since returning from his latest DL stint, Holliday has performed fairly well. In a must win game, I'd love to have someone with Holliday's experience in there. He's a proven winner who has gotten it done in the postseason before. At the very least, Bird will provide the Yanks with a left handed power threat on the bench for pinch hit scenarios later in the game.

Penciling Castro in the lineup is another easy decision for Girardi. Though many might expect Castro to be a better fit in the two hole, you've got to go with the hot hand. Castro, when healthy, has had a great season, but Headley has been better as of late. Besides, it's nice to have a .300 hitter in the seventh spot. Castro can get on base and hit for power, thus providing the Yankees with a weapon near the bottom of the order.

I'll concede that Castro and Headley can be flipped in the lineup, but for the moment I'll keep the order as is. 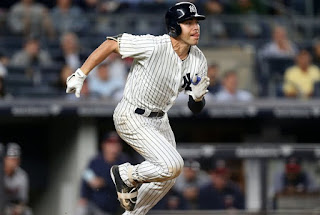 Ever since he earned his starting center fielder's job back, Ellsbury has been one of the hottest hitters in the Yankees lineup. As previously stated, a plausible argument can be made to swap Gardner and Ellsbury, but that's highly unlikely. Despite being given nicknames such as "The Thief" by the Yankees faithful for his albatross of a contract, Ellsbury is finally producing and he's doing so at the best of times. Even if we were to assume that Aaron Hicks were to return from the DL prior to the Wild Card Game, it would be tough to insert him into the lineup over Ellsbury.

As one of the few players on this team with extensive postseason experience, though it came with the Red Sox, the Yankees will be counting on Ellsbury to continue his recent success and get the job done in the Wild Card Game. Plus, you have to imagine Ellsbury is still upset that Girardi benched him in his only other chance to play in the postseason for the Bombers, during the 2015 Wild Card Game.

Despite struggling with the bat immediately after coming over to the Yankees in a July trade from the White Sox, Frazier has proven his worth during the last month or so. With Headley moving over to first, Frazier will field his natural third base. This may end up being Frazier's last game in pinstripes. Given that the chances of him returning next year are slim to none, we should expect the New Jersey native to leave it all out there, and hopefully help the Yanks advance to the ALDS.

The odds of the Yankees winning the division are dwindling by the day. Therefore, Girardi has an obligation to begin preparing the best possible lineup he can send out there for the Wild Card Game. Currently with a 5.5 game lead over the Twins for the first Wild Card spot, the Yankees are far superior to their potential opponents. A loss to any of them, and failure to advance to a playoff series for the first time since 2012, will be an embarrassment. The lineup identified above gives the Yankees the best chance to win.