Luis Severino should start the Wild Card Game--but who should the Yanks turn to if he cant?

By Unknown - September 04, 2017
In an ideal world, the Yankees will go on a magical run to win the American League East. This is certainly doable, but the lack of remaining head-to-head matchups with the Red Sox for the duration of the season makes such an outcome much less probable. The Bombers will more than likely be hosting, and at the very least playing in, the AL Wild Card Game. Young ace Luis Severino continues to prove that he should get the nod for the Yanks in this do or die game. However, with the race coming down to the wire, Joe Girardi may not have the privilege of aligning his rotation in a way that would enable Severino to get the start. So if not Severino, then who? This article will provide a subjective ranking of the next best available options to start for the Yanks with the season on the line. 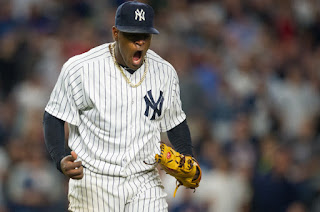 
This past Sunday against the Red Sox in the Bronx Luis Severino continued to cement his status as Yankees ace. The young righty was undeterred in his matchup with potential AL Cy Young Chris Sale, out dueling the southpaw and leading the Yanks to a much needed victory. If the Yankees are in a position to choose their starter in a Wild Card game scenario, it would have to be Severino. In the event that they are not, I thought it would be interesting to evaluate the other options available.

Never in a million years did I think I'd trust Sabathia with the season on the line at the start of the season. Ever since 2012, the big guy's career has been on a steady decline. This season, however, we've seen a much different Sabathia. Though no longer the ace he was when he first signed with the Yanks, Sabathia has become a stopper for the Bombers, going 8-0 with a 1.44 ERA following Yankees losses. 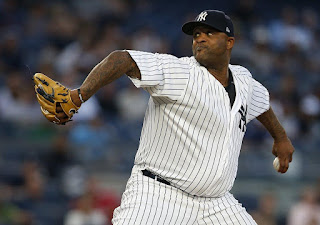 Sabathia has the playoff experience and is not afraid of the big spot. Granted, Sabathia's overall impressive numbers are a bit inflated due to his absolute domination of the Red Sox this season, but he's still performed at an above average level. If the Yankees can't go to their current ace with the season on the line, I'd be comfortable turning to the former ace who has led the them to the promise land in the past.

The Yankees acquired Gray from the Oakland A's at this year's trade deadline to provide a consistent force at the top of their rotation. Gray has been the victim of poor run support and subpar fielding since arriving to the Bronx. Though he's pitched well enough to win in each of his starts as a Yankee, he only has two victories in six starts to show for it. 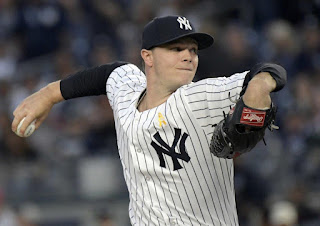 Gray's only two postseason starts came in 2013 with the As. Though he dominated the Detroit Tigers over eight innings in one start, he gave up three earned runs in five innings in the second. These numbers should in no way preclude Gray from getting the start for the Bombers, but Yankees fans have not yet seen the best that Gray has to offer. Of course Gray will be an integral part of any postseason rotation should the Bombers earn the right to play in the ALDS and beyond, but as of now Severino and Sabathia should get preference.

The Yankees sent Tanaka to the mound in their only Wild Card Game experience since its inception. In 2015, Tanaka had the misfortune of running into Dallas Keuchel and the Houston Astros. The Yankees were shut down by the Astros' ace, so it didn't really matter what Tanaka did. He lasted five innings, giving up two solo home runs.

To his credit, Tanaka has turned around his season in the second half. After getting off to a horrendous start, the right hander has done an impressive job of limiting his number one weakness: home runs. That being said, Tanaka is still a home run liability, especially at Yankee Stadium. Similar to Gray, Tanaka will be a part of any postseason rotation. However, his inconsistency should preclude him from getting another do or die start, if the Yankees have any say in the matter. 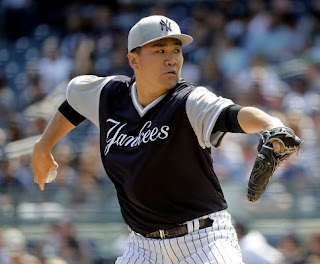 Hypothetically, the Yankees could also turn to veteran Jaime Garcia or rookie Jordan Montgomery, but these scenarios are highly unlikely so I won't even bother delving into either one. Garcia has been mediocre at best in a Yankees uniform, and Montgomery is still learning his way in the Majors.

Winning the division and avoiding the do or die Wild Card Game is the optimal outcome for all Yankees fans, but the latter seems like the more likely path to the playoffs as of now. Granted, this could change if the Red Sox continue to struggle. Nonetheless, the preferential order for starting the Wild Card game is Severino, Sabathia, Gray, and Tanaka. It is comforting to know that any of these four starters could, on any given night, shut down an opposing lineup. All, at the very least, have consistently kept the team in games this season, and that will go a long way come playoff time.

Agree? Disagree? Share your thoughts with us either by commenting here or responding to the article on Twitter!