By Unknown - September 02, 2017
Matt Holliday’s three run shot in his first game back off the DL proves to be the big difference today in the win for the Yankees. Masahiro Tanaka was about as good as he gets, providing seven innings of one run ball. The Yankees were three-for-five with runners in scoring position and Chase Headley recorded his eighth three hit game of the season en route to a 5-1 Yankees victory. 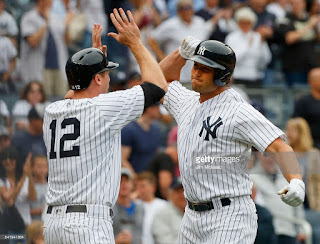 The Yankees needed Tanaka to be the stopper on Saturday. Since the All Star break, Tanaka has been very solid, posting a 3-2 record with a 2.96 ERA. The Yankees lineup would go against Drew Pomeranz, who has been good against the Yankees this season, owing a 3.43 ERA against the Yanks in four starts. The Yankees bipolar offense would have to come out of its shell early today.

Tanaka looked pretty good early on. A walk to Andrew Benintendi (by the way, let’s not pitch to that guy in a close game) was the only blemish as Tanaka got three weak ground balls to end the top half of the first.

Brett Gardner led off with a well hit grounder to second base, but a diving effort by Tzu-Wei Lin retired Gardy. Rafael Devers made a spectacular play on a hard hit ball by Gary Sanchez, but he would throw the ball away. It would go as a base hit and an error on Devers, who’s throw allowed Gary to reach second base. Aaron Judge, back in the four hole for some reason, had another first inning opportunity to do some damage. He would ground out to Devers for the final out of the inning.

Pomeranz was really feeling his curveball early on, throwing it in any count for a strike. Literally as I typed this sentence, he threw a fastball and Chase Headley want yard for a solo shot to put the Yankees up 1-0. The homerun was the first allowed by Pomeranz in three starts.

Oh hey, Matt Holliday! Glad to see you’re alive. He would pop up to shallow center in his first at bat back off the DL. Greg Bird would stay hot with a single up the middle. After a walk to Ronald Torreyes, Brett Gardner had a chance with runners on first and second. He hit a routine ground ball to third base, and Rafael Devers hot dogged it, took his time, and Gardner beat the lackadaisical throw to first. With two outs and the bases juiced, Aaron Hicks would try to join the fun. He hit a missile just to the right of second base, Tzu-Wei Lin, who was just called up today, made another great play to nab him at first.


In the top of the fifth, Rafael Devers led off with a single. However, the Kraken has a pretty strong arm, and Sanchez hosed him for the first out of the inning. With a very lame swing from Christian Vasquez and a sharp look back at the Red Sox dugout, it could have been a failed hit and run.

Through five full innings, Tanaka was dialed in. However, the Yankees offense was not. Headley’s solo home run remained the only blemish for Pomeranz. 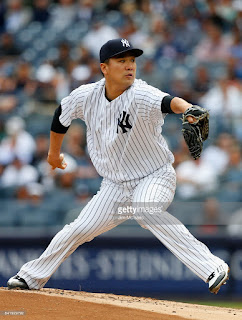 The law of ex-Yankees struck in the top of the sixth, as Eduardo Nunez ripped a leadoff double. A ground ball to second base with nobody out from Benintendi moved Nunez to third with one out and Mookie Betts at the dish. It wouldn’t matter who was at the plate, though. Gary Sanchez’s block attempt scattered away too far from the plate, allowing Nunez to score from third. Mookie would walk to keep the Red Sox threat alive. After a lineout and a flyout, the Yanks would head to the bottom half of the sixth knotted at one.

Gregorius walked to lead off the sixth, and Headley moved him to third with nobody out with a single to centerfield. That would bring up Matt Holliday who absolutely destroyed a first pitch offering from Pomeranz into the left field seats. The Yankees took a 4-1 lead.

In the top of the seventh, Tanaka stayed on the bump and Torreyes recorded all three outs via two groundouts and a pop up.

Jacoby Ellsbury, who has been swinging a pretty decent bat as of late, would drill a leadoff triple into the left center gap. He would be driven in by an infield single from Sanchez, and the Yanks took a 5-1 lead. That would be all in the seventh for the Bombers.

David Robertson came on in relief of Tanaka’s great performance. With a man on first and a two out infield single from Betts, D-Rob buckled down and got Mitch Moreland to ground out to Didi to end the threat.

Dellin Betances came on in the ninth to put this one in the books and we got a good look at filthy Dellin today. He struck out Hanley Ramirez, Devers, and Vasquez in order to secure the win for the good guys.