By maxx - September 18, 2017
The Yankees may be coming off a loss against Baltimore, but there is much to be excited about in the Bronx. The Bombers have won five straight series since the sweep by Cleveland, and they have performed great in that span. They have won games with their explosive offense, closed tight games with their bullpen, and even played enough small ball to win a low-scoring game. The list goes on, but in short, the Yankees are doing a lot of things right. It may not always be pretty, but it's working. This matchup against the Minnesota Twins may be the most crucial since the Boston series as the Yankees can all but ensure a playoff berth while closing in on a division title if they can corral the Twins at home. 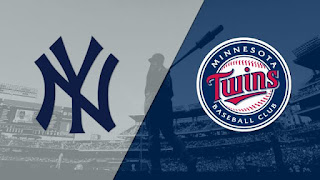 
Jaime Garcia goes against his former team for the first time since coming to New York. Garcia only pitched one game for the Twins, a win against Oakland before being traded to the Yankees. The lefty’s reaction to being pulled in his last start made some waves in the news. When manager Joe Girardi came out in the fourth inning to relieve the righty, Garcia didn’t even look at him and walked off. This would lead to an emotional conversation with the skipper in the dugout later. The Michael Kay Show on ESPN radio even mentioned that in one of his former stints, he used to have meetings with the coaching staff to teach him how to give the ball back to the manager so this may be nothing new for Garcia. This distraction cannot continue for a team with serious postseason hopes, and hopefully, Girardi’s message didn't fall on deaf ears. Garcia was good in his last start but is 0-2 in his Yankee career with a 4.60 ERA.

Santana is having a great season so far, and in his last start, the righty blanked the Padres in six innings pitched. However, Santana does not have a great history against the Bombers, owning a 6-9 record in 19 starts with a 5.78 ERA against the Yankees in his career. Monday will be the first time Santana has faced the Yankees this year.

CC was supposed to pitch Sunday against Baltimore, but Girardi and company decided to pitch him Tuesday so that he can avoid pitching on the artificial turf in Toronto next week. Sabathia was pulled early in his last start against the Rays but handled it in a more positive way than his teammate. CC has been a bit up and down lately, letting up one, five, and one run in his last three starts. However, he is 2-0 with a 3.14 ERA since coming off the DL in early August.

Berrios is another Twins pitcher having a good year, coming off a 5 2/3 inning outing against the Toronto Blue Jays, surrendering only one run. However, the righty is 0-1 with a 4.08 ERA in his last three starts. Hopefully, the Yankees get some good luck and get a poor outing from the recently inconsistent Berrios. In his last start against the Yankees on July 19th, the righty went 6 2/3 innings and surrendered only one run in a 6-1 Twins win in Minnesota.

Tanaka is coming off an excellent bounce-back outing against the Orioles, going seven innings and only surrendering two runs. In his last three starts, the righty is 2-1 with a 5.00 ERA. However, most of the damage occurred in his seven-run implosion against Texas. Tanaka has recovered nicely from his horrific start of the summer and hopefully can have another great outing on Wednesday. Masahiro has not faced the Twins this season.

“Big Sexy,” has been less than stellar this year, and his recent form is even worse. Colon is 0-3 with a 7.53 ERA and only six strikeouts in his last three starts for the Twins. However, he has been pretty consistent with his length, going 6+ innings in five of his last six starts. In his lone start against the Yankees this year, the righty pitched only four innings, surrendering four runs on eight hits in a loss at home.

Didi Gregorius
Didi is looking to break his tie with Derek Jeter for most home runs by a Yankee shortstop in a single season, and he missed the first month of the season. The lefty batter is hitting .429 with nine hits, 12 RBIs, and two home runs in the last seven days, and is arguably playing the best he has all season. Sir Didi has been great against righties this year, hitting .305 with 20 of his 23 home runs against them, and he will face three straight righties in this series. A stellar defender to boot, Didi is hoping to continue his remarkable streak in this crucial home series.

Chad Green
The reliever has been used peculiarly in recent weeks, employed in blowouts rather than the high leverage situations he has been great in this season. Who knows what Girardi and company are thinking about this strategy, but it will be talked about ad nauseam if it happens again and it costs the Yankees. Green is rested at the moment, and will probably tag team with Garcia day one as Girardi likes to do with his best reliever.


Greg Bird
The smooth-swinging first baseman seems to be getting into a power groove in recent weeks, hitting two home runs in the last three games. Although his season, as a whole, has been a disappointment considering the blistering hot spring training he had, if Bird can get hot going into October, it would be a huge boost for the Bombers.

Eddie Rosario
The Twins left fielder is coming off a big game against Toronto where he went 3-5 with two home runs. In his last six games, he has five home runs and seven RBIs off of 10 hits. The lefty has 26 home runs on the year and will be chomping at the bit to play at Yankee Stadium’s homer-happy short porch in right. In his two games against the Yankees this year, Rosario is 2-8 with two RBIs.

Joe Mauer
Much of the Yankee faithful haven’t forgotten Mauer’s 2009 MVP season, but that was a long time ago. Currently, the Twins slugger is batting .305 with seven home runs this year, and this month he is hitting .364 with 12 RBIs. Mauer went 1-7 in his two games against the Bombers this year, and hopefully, the Yankees pitching staff can continue that success and cool off the hot hitting lefty.

Conclusion
Before the season started, who would’ve guessed that this would be such a pivotal series for both teams? If the Yankees take care of business, they will all but wrapped up the wildcard race, and can turn their focus to chasing Boston for the division title. If the Twins can pull the upset in the series, the Bombers playoff hopes will be in jeopardy, and they can most likely forget about catching Boston. However, the Yankees are the favorite in this series for a reason; the club has displayed some great starting pitching paired with an explosive offense that can beat any pitching staff. The Yankees need to and should handle business at home.