By maxx - September 11, 2017
The Bombers have won seven out of their last ten games and punctuated that with a huge 16-7 win in Texas yesterday. Trailing the Red Sox by only three and a half games, the Yanks have their eyes set on catching their arch rivals. This may be an away game on the schedule, but due to the threat Hurricane Irma, the Rays will host the Yankees in Queens at Citi Field, which should amount to a home game for New York. The last time these squads met, the Yankees were able to take three out of four in the Bronx. 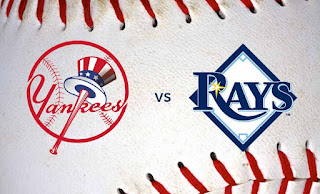 The last start for CC was one to forget, surrendering five runs with three home runs in five innings pitched. CC has been great this year for the Yankees, and is undefeated after losses this year, effectively being the club's stopper. The lefty's last game against the Rays was less than ideal, letting up four runs in 4.1 innings pitched. After a heavy bullpen usage yesterday, CC needs to go the distance to start this series.

Odorizzi struggled this summer averaging over a 6.00 ERA from June to August. He was able to have a great outing against the Twins, where he went 6.2 IP with six strikeouts no runs, one hit, and a walk. The righty only has one start against the Yankees this year, all the way back in April where he surrendered four runs and two home runs.

Gray had an odd stretch to begin his Yankee career, pumping out great outings, but never seeming dominate. However, that changed the last outing, surrendering no earned runs over 5.2 innings in a blowout in Baltimore. Gray needs another great start like that, and it won't be easy against the power hitting Tampa lineup.


Snell is coming off a terrible start against the Twins, letting up six runs in four innings, but has been pretty good for the past month, owning a 2.97 ERA with a 3-0 record in seven starts. The lefty’s last start against the Bombers was a three run no decision in the Bronx.

Garcia has gotten plenty of criticism since coming to the Bronx, not recording a win in five starts with the club while sporting a 5.11 ERA as well. The lefty has been splitting starts recently with Jordan Montgomery, and the Yankees hope he can get back on track to finish off the series.

The two-time All-Star, Chris Archer, is having a less than stellar season, and his last two starts exhibit that trend. In the first start of the month, the righty lasted only eight pitches, surrendered two home runs, and left early with forearm tightness. The next start was barely better, only lasting three innings, allowing six earned runs in a loss to the Red Sox. The Yankees hope this Archer show’s up to Citi Field and not the All-Star.

Starlin Castro
Since coming off the injury, the All-Star second baseman has been a sparkplug for the Bomber’s offense, batting .370 this past week with seven RBIs and two home runs. Castro had a rough outing in Texas, where he was one of two Yankee starters who didn’t reach base, going 0-6 on the day. It would seem that this was most likely just an off day for him, but it would be something to watch if he struggles early at Citi Field.

Chad Green
A lot of fuss has been made about Green’s usage in the past few games, drawing the ire of fans and media alike. Joe Girardi inexplicitly used the shutdown reliever in blowout games, making him unavailable for close games where his talent would be more useful. After pitching over 40 pitches yesterday, the righty will most likely not be available for the whole series, but present or not, it will be the topic of discussion, especially if the Yanks find themselves in a close game. Just a thought, Chad Green’s pitch count has gone up in his recent appearances, and that could hint that Girardi and company are prepping Green for a lengthy outing in a possible wild-card game if the starter falters early. The idea that they are trying to see how long the reliever could go effectively would make more sense than using one of your best assets in blowouts.

Aroldis Chapman
Another reliever that has been the topic of conversation as of late, Chapman has recently regained his closer role due to his solid outings in recent weeks. Whether or not you think this is a good move long term for the club, it is a great to see the fire-throwing lefty heading in the right direction. Chapman's velocity has been up for the past month, but his confidence seemed to be an issue and this demotion seems to have helped him work his way back to form.

Evan Longoria
The Tampa slugger is probably the most successful hitter against Yankee pitcher Sabathia, owning a .421 batting average and an outstanding eight home runs in 76 at bats. Longoria has been successful against the Yankees, but hopefully, a pitcher friendly Citi field will help the Yanks keep him in check.


Lucas Duda
Duda is returning to Citi Field where he spent two half seasons as a New York Met for the first time since he was traded to Tampa. The lefty slugger was almost a Yankee as well, but trade talks broke down late in the negotiations, causing an odd back and forth between the two clubs. In three games against the Bombers this year, Duda has three hits, two home runs, and three RBIs in seven at bats.

Logan Morrison
How could anyone forget about the outspoken first baseman for the Rays? The lefty made his beef with Gary Sanchez' participation in the Home Run Derby well known but has been relatively quiet since Sanchez knocked off 2016 Champion Stanton in the first round. On the field, Morrison is tied for fifth in the AL in home runs with 36, batting .248 as well. In the past week, however, he is batting only .188 with one home run and three hits. As Sanchez continues to impress and Morrison continues to falter, the Rays' comments are going to seem even worse.

The Yankees are starting to get on a roll now as the team is firing on all cylinders, and were within only one out of winning eight of their last 10. It may be a cliché, but every game is almost a must win from here on out as the Red Sox aren’t slowing down anytime soon. The club caught a break only having to travel to Queens for this series, and need to take advantage of this unofficial home game.