By Matthew Luzzi - September 22, 2017
The final road trip of the regular season will take the Yankees north of the border to face the last place Blue Jays, who will be trying to eliminate the possibility of the Yankees winning the AL East. Despite winning eight of their last ten, the Bombers still find themselves three back of the Red Sox with just ten games to go, and in dire need of a few Boston losses in order to avoid the dreaded wild card game. The series shouldn’t be as easy as one would think however, as the Yanks are only 6-7 vs Toronto this season. 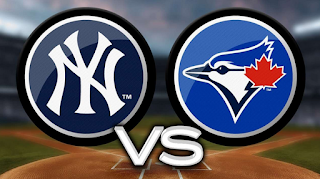 In the series opener, Masahiro Tanaka will get the ball as he goes for win number 13, and his third against the Blue Jays on the year. Tanaka has recovered nicely in the second half after being one of the worst pitchers in baseball in the first half, yet his ERA is still close to five and he has still been giving up the home run ball at a frequent rate, 32 overall. Tanaka has been a horse for the Yanks over the past month, as he has gone seven innings in four of his last five starts.

Marco Estrada, like Tanaka, has not had the year that he envisioned in March, and also has a similar ERA and win loss ratio as Tanaka, something that would be a good thing in recent years.  Estrada also gives up too many home runs, 29 on the year for him, and has struggled in his four previous starts against the Yanks this year, with a 5.64 ERA.

Sonny Gray will be on the mound on Saturday afternoon, meaning that it is official that the Yankees will not score more than five runs in this game. To be exact, in Grays nine starts since being acquired, the Yankees have scored more than five runs only twice, and have been held to one run or fewer in five of those nine starts. Even with the lack of run support, Gray has not been as effective this month as he was in August, posting a 2.70 ERA in August and currently sitting on a 4.01 ERA for September. Gray will hope to have his third stellar start against the Jays on Saturday, but hopefully he will get more than the one run combined he has gotten in those two games.


Joe Biagini is the type of pitcher that could very well shut down this Yankee lineup. The reason for this is because this Yankee lineup seems to do poorly against pitchers who are pitching poorly, and make no mistake about it: Joe Biagini has been pitching poorly this season. Even though Biagini has put together a few nice starts since moving from the bullpen, he has also had some very quick, ugly outings, so beware of anything from Biagini on Saturday.

It is easy to forget just how well of a rookie season Jordan Montgomery has had, giving Yankee fans a possible sneak peek into the future at a fixture in the rotation. Montgomery has bounced back well since his bad July and his minor injury, and he showed that in his last start, when he threw six innings of shutout baseball in a win vs the Orioles, which was Montgomery’s first win since July 25th.

Marcus Stroman is the ace of the Blue Jays staff, and will most likely give the Yankees his best stuff when he faces off with them on Sunday, as Stroman has been one of the hottest pitchers in baseball for not just this month, but since the beginning of July. Stroman’s 2.57 ERA since the beginning of July is outstanding, and so is his 2.18 ERA in his four starts during this month. Yet, maybe most impressive is the fact that he has only allowed six home runs in those 15 starts since the start of July, with three coming in the same start. Safe to say that Tanaka and Estrada could learn a thing or two from Stroman.

Didi Gregorius:
Didi recently became the all-time leader among Yankee shortstops for most home runs in a season with 25, passing the Captain. Didi hasn’t just launched 25 homers this year, he’s also become arguably the best all-around player on the team, and is hitting an impressive .332 on the road this year, compared to just .248 at home. Not only is Didi the most consistent hitter on the team, he also may be the most clutch, as he has delivered big hits all year in big spots, which will need to continue in order for a deep run into October to be possible.

When Sanchez got injured in the beginning of the year, it seemed as if his aspirations of being the best power hitting catcher in baseball were dormant for the year 2017, yet someway, somehow, Sanchez is sitting at a whopping 32 home runs with ten games left to play, and is by far the most powerful catcher in the game today. Gary has been on a tear in the month of September, batting .339 and showing much more focus behind the plate.

Aaron Judge may be the first player in history to go from being the best player in the league to the worst, to back to being one of the best all in the same season. It was tough to watch Judge at the plate in the second half of July and August, as it seemed he was striking out in most at-bats. However, in the month of September, Judge has once again rediscovered his power stroke, as he has eight homers in the month, and should be delighted to be facing the Jays, who he has crushed this year. Judge is hitting .333 with six homers against the team from Canada this year, yet he still probably wishes he was facing the Orioles instead.

It will be vital for the Yankees this weekend to take advantage of their inferior opponent, as there will be no more inferior opponents come playoff time. Something else to watch out for as the season winds down is the rotation, and whether Joe Girardi pushes certain starters back or up in order to plan accordingly for the likely Wild card game and even a possible one game play in for the AL East title, as if the Yankees and Red Sox end the season with the same record, there will be a one game play in at Yankee Stadium. Safe to say, the winner of that game if it happens will be in great shape to make a deep run.