By Ryan Thoms - September 26, 2017
The Yankees come into their second to last series of the 2017 regular season down four games in the American League East. While the odds are extremely slim that they catch Boston for the division, the Yankees have still yet to secure home field advantage for the Wild Card. The magic number to do so sits at two games, which can be easily accomplished in this series against a Rays team that has had an overall poor season. 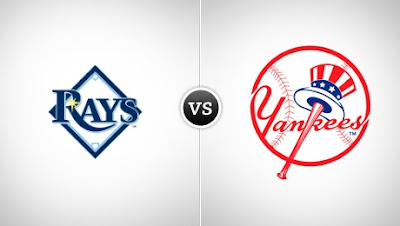 The opening game of the series will be a duel of two young southpaws who both have had rollercoaster seasons. Blake Snell comes into this game riding a string of solid performances to go along with his historic success against the Yankees. While he has yet to live up to the hype that surrounded him as one of top Rays’ prospects, he has shown glimpses of being able to shutdown opposing lineups. Blake Snell’s most glaring weakness is his control as he averages more than four walks per game and until recently has had issues keeping his pitch count at a reasonable number late into games.

Jordan Montgomery is pitching in what will likely be his last start of the season unless the Yankees decide to pitch him the season’s final game against Toronto over Jaime Garcia. Montgomery essentially blew past any preseason expectations and has been an integral member of the Yankees starting staff. He is currently one of the fringe contenders to make the postseason roster, so this start will be huge for him in that aspect. Montgomery had his best start since early August last time out versus Baltimore as he tossed six scoreless innings. The Yankees will be looking for more of the same in the southpaw’s start.

Matt Andriese will start the second game of the three-game set for the Rays. He missed more than two months over the summer due to injury and has not been effective since his return. He has failed to pitch past the fifth inning in all but one of his five starts since his DL activation. The Yankees offense needs to take advantage of his recent slide and get him down early in the game.

A crazy amount of run support should not be needed, however, as Luis Severino will oppose Andriese. Severino has been magnificent this season and this should be his final start before the Wild Card game barring any miraculous turn of events. Severino had one of his worst starts of the season his last time out versus the Twins, but was bailed out by the offense. Severino will look to get back on track against the Rays and set himself up to pitch the biggest game of his life.
Game Three (Thursday, September 28 | First Pitch: 7:05 PM ET)
Jacob Faria (5-4, 3.33 ERA) vs. Sonny Gray (10-11, 3.31 ERA)
TV: YES

Alex Cobb was originally scheduled to pitch on Thursday, but due to 2017 being his first back from Tommy John, the Rays are opting to skip it in favor of the rookie Jacob Faria. Faria was a pleasant surprise in the beginning of the season, but was demoted from the rotation after he had some troubles over the summer. He has posted an ERA of 4.37 since the beginning of the second half compared to his 2.11 ERA prior to the break. Faria failed to find the strike zone his last time out versus the Bombers, so the Yankees need to continue their patient approach against him.

Sonny Gray will make his final start of the regular season in this finale. Gray has been solid for the Yankees, but has yet to truly show his ability to dominate opposing lineups on a start to start basis. Gray figures to be a huge factor in the Yankees playoff rotation and this start could be a giant confidence boost for not only him, but the team. Gray had his best start of the season for the Yankees his last time out versus the Rays at Citi Field.

Aaron Hicks
Aaron Hicks was activated from the disabled list prior to Tuesday night’s game and was immediately inserted into the leadoff role for the game. Hicks was arguably one of the team’s most dangerous hitters in the spring months, but performed atrociously following his activation from the DL. Some may argue he was not fully healed in August, but after another almost whole month of absence Hicks should be ready to go and be ready to prove that his early success was not a fluke.
Rays

Evan Longoria
The notorious Yankee-killer of the Rays, Longoria has arguably endured one of his worst offensive seasons in his career in 2017. His 19 home runs are his lowest total since 2012, when he only played 74 games. Nevertheless, Longoria is as dangerous as anyone when he faces the Yankees, and he has the upmost potential to hurt the Yankees in this series.

Logan Morrison
Logan Morrison has enjoyed a breakout season in the power department with 37 home runs, but is known by most Yankee fans as the whining Home Run Derby snub who believed Gary Sanchez was not worthy of a derby invitation. Morrison does have the potential to hit home runs in bunches, and it would be a solid idea for the Yankees to try to silence him once and for all in this series.


The Rays are 4-6 in their last ten games and appeared over matched in the series in Queens earlier this month, however, they have the history of heavily enjoying the role of being spoilers. The Yankees need to keep up their momentum from their win versus Kansas City on Monday and continue to fight for the Wild Card home field advantage and possibly a division title.