By Unknown - September 09, 2017
Just when it appeared that the Yankees were about to waste another brilliant outing from ace Luis Severino, the offense suddenly did just enough to scrap together a victory. After blowing a four run lead last night to eventually drop the series opener to the Rangers 11-5, the Yankees sent their ace to the mound and he didn't disappoint. The Bombers struggled to get anything going against Rangers starter Andrew Cashner. Once they were able to get into the Texas bullpen, however, the Yanks rallied to walk away with the victory. 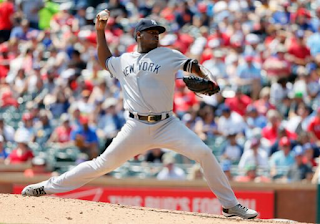 
The game remained scoreless with both Severino and Cashner crusing along until the fifth inning. With a runner on first and two outs, the Rangers got their first, and only, hit against Severino. Catcher Brett Nicholas' double to the right field corner drove in the Rangers only run, and handed them what at the moment looked like a decisive 1-0 lead.

Severino would provide the Yankees with seven strong innings of one run ball. Unfortunately for Severino, he departed the game in line for a loss. The Yankees, unable to get anything going against Cashner for most of the day, drove the Rangers' starter from the game in the seventh. With runners on first and third with one out against reliever Alex Claudio, Chase Headley came to the plate. Headley continued his consistent production for the Bombers, coming up with a sac fly to fairly deep center field, tying the game at one.

After David Robertson pitched a quick and scoreless eighth inning, the Yankees rallied in the top of ninth. Starlin Castro led off the inning with a quick single, though he was erased on Aaron Judge's fielder's choice. Jacoby Ellsbury continued his recent hot streak, with a single to right field that put runners on first and third for Todd Frazier. Ricky Rodriguez came on in relief of Claudio to promptly hit Frazier and load the bases.

With the bases loaded and one out, Tyler Austin singled in Judge to put the Yankees ahead 2-1. The Yankees would tag on one more when Rodriguez walked Headley with the bases loaded. Aroldis Chapman, who was recently given his closer title back, pitched a quick 1-2-3 inning to hand the Yankees a much needed win, ensuring the Bombers won't see their Wild Card lead diminish by the end of the night.

As they go for the series victory at 3:05PM tomorrow, the Yankees will send Jordan Montgomery to the mound against Rangers starter A.J Griffin.