By Unknown - October 02, 2017
Throughout the course of the regular season the Yankees bullpen went from being the team's biggest strength, to an astonishing weakness, and back to an overpowering strength. With ace right hander Luis Severino taking the mound against the Twins in Tuesday's AL Wild Card game, the Yankees will hope to get a solid outing from their starter. Even if Severino were only to last five innings, the Yankees have enough bullpen depth to feel comfortable about emerging victorious. In the subsequent paragraphs, I will analyze the bullpen hierarchy heading into Tuesday's do-or-die game. Though my analysis begins with the pitchers Joe Girardi will turn to in the later innings, it is twofold in the sense that the discussion will encompass reliability in addition to bullpen role. 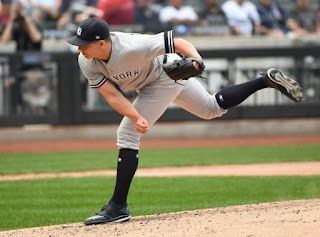 I'm confining my analysis only to those relievers who can be trusted in high leverage situations. I'm sure anyone with a rooting interest in the Yankees would love to see a blowout victory, thus rendering the bullpen hierarchy irrelevant, however, this is not likely to be the case. Despite the fact that the Yankees are clearly superior to the Twins in just about every way, anything can happen on any given night, and Joe Girardi must be prepared for all scenarios.

If you had any doubt about whether Aroldis Chapman would get his mojo back, the month of September was a reassuring sign that the flamethrower is back to being one of the most dominant relievers in the game. In the month of August, Chapman posted a 9.00 ERA, giving up eight earned runs and three homers in only eight innings pitched. Chapman's struggles became so profound that he, the highest paid closer in the history of baseball, was removed from the closer's role. After being eased back into high leverage situations, Chapman appears to be back to normal.

One thing is for sure. If the Yankees are leading heading into the ninth inning, it's almost a foregone conclusion that Girardi will call upon his closer. In 11 September outings, Chapman did not give up a run. It turns out that the Cuban Missile, as he likes to be called, figured it out at just the right time. 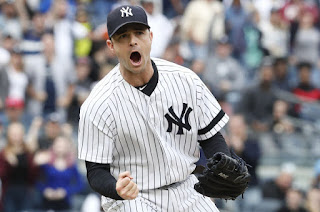 Ever since returning to the Bronx after a July trade with the White Sox, Robertson has been one of the best relievers in baseball. Pitching in meaningful games again has clearly brought out the best in Robertson. Girardi has not been afraid to call on Robertson when needed. Similar to Terry Francona's usage of star reliever Andrew Miller, Girardi has brought Robertson into games as early as the fifth inning and as late as beyond the ninth. Robertson's dominance has transcended traditional bullpen roles over the last few months.

It's indisputable that the trade that brought Robertson and fellow reliever Tommy Kahnle (more to come on him later) to the Bronx turned around a bullpen that, led by Tyler Clippard, blew numerous leads. Had it not been for the mid-season bullpen meltdowns, the Yankees likely would have won the AL East. The Yankees unofficial but official eighth inning guy recently broke Mariano Rivera's 2010 consecutive outings without allowing a hit or run streak with his eighth such appearance. Furthermore, Robertson hasn't allowed a run since August 25th.

Chad Green's emergence has been a more than pleasant surprise for the Yankees this season. Green, originally thought of as a starter, has always had dazzling stuff. Out of the bullpen this season, he's been an invaluable weapon. Girardi has consistently brought Green in to pitch multiple innings. Being fully rested for the Wild Card game, Green can pitch two, or even three, innings if he's absolutely needed in the event Severino falters. Needless to say, Green has transformed from a borderline major leaguer to an elite bullpen arm in just a few months.

This season, Green went 5-0 with a 1.83 ERA in 40 appearances, striking out 103 batters in 69 innings. Should the Yankees defeat the Twins and move on the ALDS, Green's versatility out of the bullpen should be any manager's dream. For now, however, Green will likely be one of the first relievers Girardi calls upon on Tuesday night. 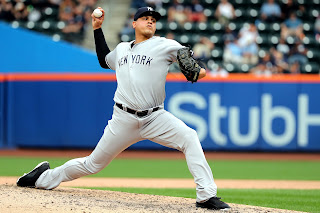 Perhaps offsetting the optimism created by Green's 2017 emergence is Dellin Betances' inconsistency. Betances has always had erratic tendencies, but, for the most part, he's been able to manage them quite effectively. Though his 2017 numbers would be impressive for any ordinary reliever, they are not up to par with Betances' usual dominance. His walks are up, and his overall reliability in high leverage situations is seriously in doubt. As fourth up in the bullpen hierarchy, there are very few scenarios in which I'd see Girardi bringing in Betances over Green, Robertson, and Chapman, especially in a close game.

With Betances, it's pretty easy to tell the kind of appearance he's going to have based on the first few pitches thrown. If he can't command his breaking ball during a given game, Betances can easily walk the bases loaded. Should Girardi call on Betances in this do-or-die game, expect his leash to be very short. The earliest sign of trouble will likely result in a quick yanking from the game.

Coming over with Robertson in the July trade to remake the bullpen, Kahnle has been an excellent addition. Another pitcher with the ability to pitch multiple innings, come in early, or come in late, Kahnle has provided the Yankees with a solid arm that can be deployed at any time. Despite having a bit of a rough patch in the month of August, Kahnle appears to have turned it around in September.

It cannot be overstated just how important the additions of Robertson and Kahnle, along with the simultaneous subtraction of Tyler Cippard, were to the team's success this season. Kahnle may not be in the same category as Chapman, Robertson, or Green in terms of trustworthiness, but he's yet another option, in the event this becomes a game of the bullpens.

Often overshadowed by the rest of the Yankees bullpen is Adam Warren. In a sense, Warren began the season in the role that Green became so dominant in. Warren's experience as a starter positioned him excellently to take on the swing role. After returning to the Yankees last July in the trade that sent Chapman to the Cubs, Warren slid back into the same role that he's excelled in for quite a few years in the Bronx.

Warren struggled a bit before landing on the DL in early September. In the last game of the season, Warren did return to pitch an inning of scoreless baseball so that's definitely a positive development moving forward for the Yankees. Due to Warren having missed a month, and the dominance of other relievers, he's pretty low on the bullpen hierarchy amongst relevant relievers, but depth is never a bad thing. 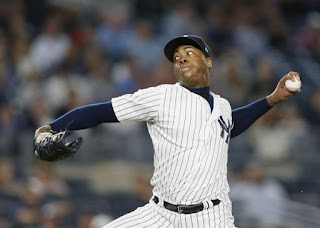 The Yankees have plenty of options out of the bullpen. Perhaps even more menacing for opposing teams is the fact that many of the Yankees relievers can be counted on to pitch multiple innings. Assuming the offense does its job by putting some runs on the board, and Severino can piece together, at the very least, a quality start, Joe Girardi should feel pretty good about bringing any of the aforementioned relievers into a close game. If all goes according to plan, the importance of the Yankees bullpen will become even more apparent in the ALDS and beyond.