By Spencer - October 02, 2017
After what has seemed like weeks of anticipation for this game, we are almost to the AL Wild Card game between the New York Yankees and the Minnesota Twins. The Yankees, standing at 91-71 to end the season, will look to advance to the ALDS at Yankee Stadium with first pitch at 8:09 PM ET. The Twins finished six games behind the Yankees with a 85-77 record, turning around what was a miserable 2016 season. 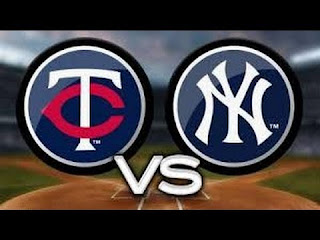 Ervin Santana (16-8, 3.28 ERA)
Ervin Santana followed up his stellar 2016 season with earning his second career trip to the All Star game in 2017. With his first appearance being all the way back in 2008 with the Angels, Santana was really the integral part in leading the Twins to the playoffs. Although Jose Berrios may have better stuff and is the future ace of the staff, Santana was far and away the best and most consistent Twins starter all season. His 3.28 ERA was good for fifth in the AL, while also finishing seventh in wins (16) and second in innings pitched (211.1). Just like how the regular season went and in contrast to the Yankees’ game plan with Severino, expect the Twins to give Santana a long leash because of their lack of options in the bullpen.


Luis Severino (14-6, 2.98 ERA)
What a bounce back season for the youngster, as he finally lived up to the potential he’s been hyped up to. Severino responded to his stellar rookie season by taking multiple steps backwards, but this season was the total opposite. He really stepped up as the Yankees workhouse with Masahiro Tanaka’s struggles all season long, finishing fourth in strikeouts, third in ERA, and ninth in innings pitched compared to other AL starters.

Severino was by far the third best starter in the AL all season long, dominating to 230 strikeouts in 193.1 innings of work. Sevy was actually much better on the road, going 6-1 with a 2.24 ERA compared to a 8-5 record with a 3.71 ERA at home. The All Star righty was even more dominant after the Midsummer Classic, going 9-2 with a 2.28 ERA, while limiting hitters to a .181 average. His WHIP was an incredible 1.04 for the season, but stats are wiped at the start of the postseason and this is by far the biggest start of his young career. Sevy actually pitched against the Twins in their series a few weeks ago and really struggled, allowing three runs and five hits in just three innings of work. The Yanks don’t even need seven innings from them, as they can go to the bullpen early in a one-game playoff.

Keys to a Yankees victory

Use the weapons you have
With it being a one-game series, there’s no reason the Yankees should not utilize their stacked bullpen. With six typically dominant relievers, Girardi should give Severino a somewhat short leash and if things even start to get out of control, bring in Chad Green, the Yankees best reliever. Girardi needs to stay away from the “Binder Joe” version of himself, as it’s illogical to play the matchup game in a game of this magnitude. For example, bringing in Chasen Shreve to face a lefty over a guy like Tommy Kahnle just because he gets that lefty-lefty matchup would be beyond frustrating. Point is, you play your best players in a game like this and throw the matchup game out the window.

Start strong
The biggest key in a do-or-die game like this is start off the scoring. If the Yanks can get off to a lead early, it’ll be huge with the weapons in the bullpen that they have. This is also certainly in the realm of possibility with Aaron Judge and Gary Sanchez torching pitchers in the first inning of games this season. Getting the crowd going early will play a crucial role in who wins the AL Wild Card game.

Things/players to watch
Aaron Hicks
Fans may forget, but just a few months ago Hicks was on his way to possibly making it to his first career All Star game. His return got downplayed and then he really scuffled when he returned from the DL. Now back from his second DL stint, Hicks could be a breakout player in this game and the playoffs. Facing his former team, Hicks will likely get the start, but a case can certainly be made for Jacoby Ellsbury.

Ellsbury broke out when Hicks went down, as he had a very good second half of the season. Ellsbury also is a much better career hitter against Santana, picking up ten hits in 34 ABs (.294) in his career against him. Hicks, although a small sample size, is hitless in six ABs with three strikeouts against Santana in his career. Regardless, Hicks will surely make an appearance in Tuesday's game and he's a player to watch.

Aaron Judge
Now this one may seem to be a bit obvious, but this is really a big game for Aaron Judge’s reputation. Sure, he hit an AL-leading 52 homers with a .284 average in his rookie season, but as said before, those stats are now the past. The MVP candidate’s main weakness this season has really been his lack of success in the clutch. He has continuously struck out or popped up in crucial situations, but a stellar performance in the biggest game of the year could help him get over those struggles in the clutch. Judge is also a player to watch for the fact that it seems that he’s back to his old self. After really scuffling the first few months of the second half of the season, Judge tore it up in September, hitting .311 with 15 homers and 32 RBIs in 27 games played.

Twins bullpen
While the Yankees do and don’t feel confident about their bullpen, the Twins bullpen is a key in this game. If Santana can give them a good start along with the Yankees bullpen tendency to blow games, the Twins bullpen could play a decisive factor in who wins this game. They’ve been quite pedestrian all season, ranking 20th in the majors with a 4.61 ERA. Their ‘pen is really full of a bunch of names fans have never heard of, including lefty Taylor Rogers who broke out with a record of 7-3 and 3.07 ERA in 55.2 IP this season. If you’re the Yanks, you have to feel good about being able to take advantage of this facet of the game.

The Yankees just recently swept the Twins a few weeks ago, which pushed their season record to 4-2 against the Twins. The Twins’ past four postseason trips have ended from the Yankees knocking them out. The Yankees are clearly the better team in every facet, but anything can happen in a win-or-go home Wild Card game.