Let's give Aaron Judge a break

By Ryan Thoms - October 12, 2017
Yeah, yeah. I know. 16 strikeouts. Three balls put in play. He had a .052 batting average. However, the Yankees don’t face the Astros on Friday, if Aaron Judge didn't play in this series.


It’s okay to be frustrated with Aaron Judge, but his performance in the ALDS doesn’t worry me the slightest bit. There’s no doubt that the Indians pitchers had Judge’s number since game one. They had a game plan against Judge from the very start, and that was to pitch him backwards and absolute smother him with off speed stuff.

Although he had a TON of swings and misses, Aaron Judge kept the same approach he kept all season, and that is extremely important. A lot of players, especially rookies, get eager and overly aggressive when they begin to slump. It is remarkable that Aaron Judge has the maturity as a rookie to work counts the way he does even when he’s in a slump.

If you’ve been paying attention at all, Fox Sports One has a “K Zone” on the screen at all times. It may be annoying, but I think it’s interesting to see where the umpires zone actually is. Aaron Judge had more balls called strikes on him than anybody in the series- by a lot. Because of Judge’s size, umpires are thrown off by where his knees are. A lot of strikes you see called on Judge are either low, or outside. With two strikes, I’ll be the first guy to say that Judge needs to swing at those pitches. However, a breaking ball with one strike, that is out of the zone, that’s called a strike, completely takes the bat out of Judge’s hands. 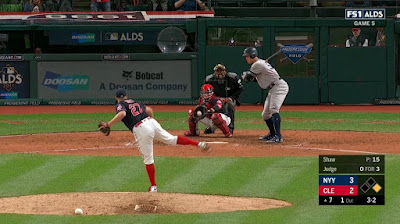 Unfortunately, this is an adjustment that might be a little too late to make. Expect the Astros to pitch Judge very similarly. Its as simple as this: teams would rather see Judge walk on a 3-1 count than have even a chance of putting a ball into orbit. He will be getting 3-1 off speed pitches and they will be out of the zone. If they are borderline pitches, they will be called strikes.

Aaron Judge needs to understand this and give himself a chance to do something with those pitches. We see Judge slump and prevail almost every other month. The way he goes about his business totally makes people forget that he’s still a rookie. This is his first postseason, and he’s going to have many more ahead of him, and you shouldn't worry about him at all.

Now we can touch on the positives.

In game three, Aaron Judge made the biggest defensive play of the series, and without it, the Yankees probably get swept. What would have been a two-run homer off the bat of Francisco Lindor in the top of the sixth, became the second out of the inning to keep a Tanaka shutout performance in tact. The home run would have put the Indians up 2-0 in game three. The Yankees obviously won that game by a score of 1-0 thanks to the heroics of Greg Bird’s absolutely majestic moon-shot home run off of tough left-hander Andrew Miller. What is a complicated robbery for most people is simply a leap for Judge, who brought the ball back from about a foot over the right field wall in the short porch in Yankee Stadium.
Also, the lone hit Judge had in the series was a HUGE momentum boost for the Yankees in game four. With two outs in the second inning, Judge hit a two-run double off Trevor Bauer, who dominated the Yankees in game one. The double put the Yankees up 4-0 in a game they ended up winning 7-3. If Judge doesn’t hit that double, the offense plays differently the rest of the game.

The Yankees probably wouldn’t have even made the playoffs had it not been for Judge, who had a 8.1 WAR in the regular season. The Yankees also wouldn’t be on their way to Houston if Judge isn’t playing in the ALDS. Let’s give our MVP a little bit of a break, shall we? Expect a big series out of him in the ALCS.