Lurking in the shadows: A look at Gary Sanchez's impressive season

By Unknown - October 01, 2017
As the unexpectedly great 2017 regular season comes to a close for the Yankees, most of the talk is focused on the mammoth right field slugger Aaron Judge. Judge has done nothing but warrant being the talk of the town as well; an All-Star in his rookie year, a seemingly runaway candidate for Rookie of the Year, a rookie record setting 52 home runs (and counting) and he is in talks for AL MVP. With a season resume like that, you can see why the MLB was awestruck by him. However, lost in the shuffle of all this, is the equally impressive season Gary Sanchez is having. 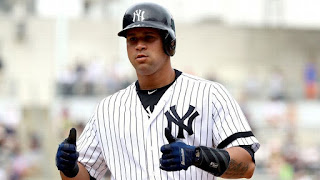 
Last August when Sanchez was called up, he took off like a rocket. Each time he stepped up to the plate he seemed to demolish the baseball. He tied the record for the fastest player to reach 20 career home runs, and he did it in only 50 games. He catapulted himself into the conversation of Rookie of the Year, and realistically should have won had it not been for the Tiger’s Michael Fulmer and some baseball voters arguing that Sanchez didn’t play a full season. Aside from this, it was clear to see that the Yankees had found an excellent piece to their new youth movement. Sanchez would finish the season batting .299 with 34 runs, 20 HRs and 42 RBIs in 229 plate appearances; that’s a line that most managers would love to see out of their full-time catcher, and Sanchez was able to do that in 53 games.

Coming into this season, the question was if Sanchez could sustain his unreal August/September for a full season. He had a bit of a slow start to the season, going 3-for-20 with only one home run, and missed almost a full month from April to May due to a bicep injury. He would come back and produce modestly, but found himself missing some time with a groin injury in June. Along with these injuries, there came some scrutiny about his catching. He struggled with pass balls, and came under fire from Joe Girardi (a former catcher himself). Even with these ups and downs, Gary managed to impress. He was voted in as an All-Star for the first time in his young career, became the Yankees leader for most home runs in a season by a catcher, and managed to stay a consistent bat in the lineup while Judge went through his slump. 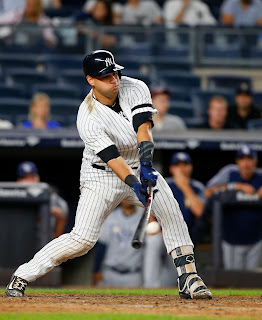 Photo Credit: Jim McIsaac/Getty Images
Sanchez will finish the season batting .278 with 131 hits, 90 RBIs and 33 HRs. Adding in the month that he missed, he very well could have reached the 100 RBI mark and 40+ homers. These extrapolated numbers would put Gary right there with his teammate and MVP candidate Aaron Judge. That being said, his numbers as they stand now are equally impressive, as he is atop the leaderboard at his position, leading Salvador Perez by six home runs, 10 RBIs and .010 on average.

While Sanchez may have some growing pains to sort through this offseason with his defense, it is clear to see that his season should not be overlooked and that he is a cornerstone of the new Yankee regime.