By Ryan Thoms - October 09, 2017
“Coming soon....” This was the caption of an Instagram post that was posted by the 24-year-old Yankee first baseman on August 15 of the 2017 season. What was coming soon?  Well, Bird who put on an absolute monstrous preview in Spring Training with eight home runs and a 1.654 OPS was determined to come back and help his team compete in what was a dreadful start to his 2017 regular season. And on a Sunday night in the Bronx, on the national stage, in a tied, scoreless elimination game, Greg Bird hit the biggest home run of his life off one of the best left-handed relievers in the sport.


Greg Bird missed all of 2016 with a torn labrum in his shoulder and came into the 2017 as the first baseman of the future. He was slotted to replace Mark Teixeira, who retired at the end of the previous season. The Yankees went out and got some right-handed insurance in Chris Carter, but had their eyes set on Bird as their guy to replace the 2009 World Champion first baseman. Bird silenced any critics with a phenomenal run in Spring Training and had earned the trust of Joe Girardi and the Yankees front office.

All of a sudden, however, Greg Bird’s season spiraled downward and did not look back. He fouled a ball off of his ankle towards the end of Spring Training, and despite his insistence that his performance was not being altered by his ankle, his performance was dramatically affected. Bird hit .100 with only one home run in 72 plate appearances and had no explosiveness in his swing. He could not catch up to fastballs and was clearly compensating for his hurt ankle. He was placed on the 10-day DL on May 2 with what was called a bone bruise.

However, this “bone bruise” was not healing nor showing any signs of improvement. Fans were questioning when Bird would be back and the lack of updates and knowledge on his situation made it a peculiar case. After trying to play through the injury in a rehab stint, he was still suffering immense amounts of pain and went for in for another opinion from Dr. Martin O’Malley at the Hospital for Special Surgery. O’Malley recommended that Bird should have his os trigonum removed from his right ankle, and Bird underwent a successful surgery. 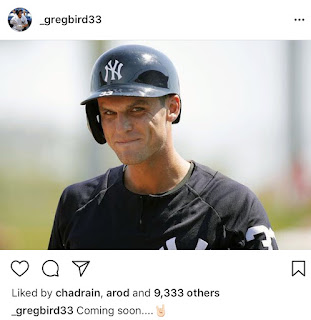 After being sidelined for almost four months, Greg Bird made his Yankees return on August 26 and made his lineup presence known. Bird cracked eight home runs and recorded 25 RBIs in 29 games to end the season and was a crucial part of the team’s September success.

His hitting did not stop once the regular season did as he hit a clutch RBI single in the Wild Card game, mashed a two-run bomb in game two of the ALDS, and hit the biggest home run of his life, which saved the Yankees' league championship series aspirations, in game three.

All of this happened after the Yankees announced they were not sure if Greg Bird was going to return in 2017, but Bird had other thoughts. The following statement from Bird came after numerous fans had called him out for his want to be on the field and the potential of faking his injury. 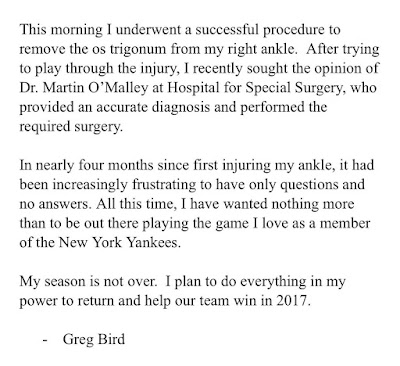 Bird’s fantastic month of September and clutch postseason moments are just glimpses of what this young man is capable of doing and no one feels better about his recent accomplishments than Bird himself. Yankees fans, Greg Bird is here to stay.