OPINION: The Yankees proved me wrong this ALDS...and I'm happy to admit it

By Unknown - October 12, 2017
As I watched Todd Frazier showcase some heads up base running skills by coming around to score from first base on Brett Gardner's ninth inning single it finally hit me. The Yankees were going to defeat the mighty Cleveland Indians and advance to the ALCS for the first time since 2012. The same New York Yankees who hit rock bottom after an absolutely crushing game two defeat in the same ballpark had somehow managed to string together an improbable comeback, winning three straight elimination games. As an eternal pessimist and current law student, I thought the Yankees fate was sealed once Joe Girardi had the managing blunder of a lifetime. Needless to say, I'm ecstatic to see that the Bombers have proven me wrong. 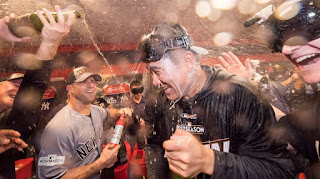 Heading into the series, I knew that the Yankees chances of dethroning the American League champions were slim to none. The Indians were by far the best team in the AL this season, and did not have any glaring weaknesses. Simply winning the Wild Card game and advancing to the ALDS, knowing that this core will likely be in the thick of championship contention for years to come, made the season a success in my eyes. I tried to remain cautiously optimistic. However, my brain told me not to get my hopes up. I subsequently chose my brain over my heart.

After a lifeless game one defeat, in which Sonny Gray couldn't make it out of the fourth inning, and the offense got shut down by Trevor Bauer, whatever remote optimism that remained nearly completely dissipated. Game one appeared to be a perfect exemplification of why the Indians were the superior team. Thinking elimination was imminent, I began to prepare accordingly. 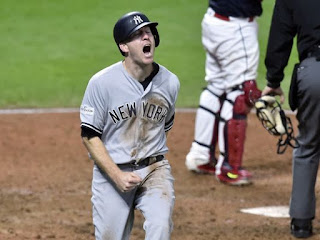 In game two, the Yankees came out guns blazing. Gary Sanchez and Aaron Hicks each took the likely AL Cy Young Corey Kluber deep, and chased him from the game early. A later Greg Bird home run, coupled with CC Sabathia's dominance following a rough first two innings, put the Yankees up five in the sixth inning. I became increasingly frustrated when Joe Girardi pulled Sabathia, who had retired eleven straight and thrown only thrown 77 pitches, after 5.1 innings. As a constant critic of Girardi, never have I been more angry at him than in game two. Not challenging the controversial hit by pitch, which really hit the knob of Lonnie Chisenhall's bat before being caught by Sanchez, was one of the worst managerial decisions I have ever witnessed in my life. The subsequent grand slam made it burn even more. Perhaps even worse was Girardi's pathetic excuses immediately after the game. Seeing him take ownership the next day was comforting, but not nearly enough to atone for such blatant incompetence.

When the Indians won game two in a heartbreaking extra inning affair, I was almost certain the season would come to an end. Hearing Yankee Stadium boo Girardi prior to the start of game three, coupled with Aroldis Chapman liking an instagram comment which referred to the Yankees manager as an "imbecile," made it seem as if the team was on the verge of implosion.

To my complete surprise, this Yankees team had A LOT of fight left. Masahiro Tanaka came out in game three and showed us why he has a reputation for being a clutch pitcher. After shutting down the Indians for seven innings, aided greatly by an Aaron Judge catch that robbed Jose Ramirez of a two-run homer, Greg Bird got the biggest hit of the season, up until that point. His solo shot into the second deck in right field off of Andrew Miller was surreal. Chapman would later seal the victory. The Yankees were still alive. 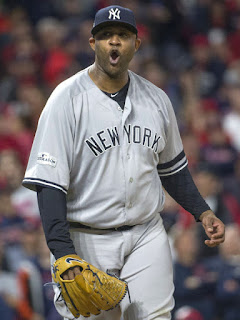 In game four, Luis Severino earned redemption from his embarrassing wild card game start, in which he only lasted one third of an inning. Giving up only three runs over seven innings, Severino did his part to keep the Yankees in the game. The Yankees offense, though aided by some shoddy Indians fielding, got a jolt of life. While I was happy that the Yankees rose to the occasion at the friendly confines of Yankee Stadium, it still felt like the Indians were destined to win this series. I was sure these two games at the Stadium were the last two played in the Bronx in 2017.

Game five lived up to all the hype and much more. With nearly all reputable sports analysts picking the Indians to win, primarily due to the pitching matchup of Kluber vs. Sabathia, the Yankees fate appeared to be set. Seeing Didi Gregorius take Kluber deep in the first inning, sparked the return of some hope to my heart. Gregorius' second homer, however, made me think the Yanks had a real chance. CC Sabathia, for the first four innings, turned back the clock to the good old days. I suddenly became overly complacent, thinking the Yankees would cruise to victory. 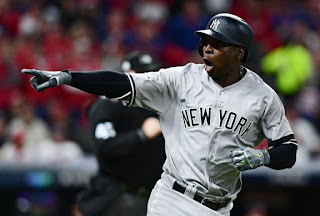 However, the bottom of the fifth was a harsh return to reality. After striking out the first batter of the inning, Sabathia gave up four straight singles. Just like that, the Indians were within one run of tying it up. Girardi, just a few days removed from the lowest point of his managerial career, made a risky move. He brought in David Robertson to face Francisco Lindor with runners on first and second. On the third pitch of the inning, Robertson induced Lindor to hit into a double play, thus mitigating the damage.

A one-run lead against these Indians is anything but comfortable. Whenever the Indians came to plate, I braced myself for the worst possible outcome. After brilliant at bats by Todd Frazier and Brett Gardner in the ninth inning, the latter of whom's ended with a two-run single, I screamed as loud as I had screamed since the Giants beat the undefeated Patriots in the 2007-2008 Super Bowl. At that moment, I knew the Yankees were on the verge of doing the improbable. Chapman would soon close the door, and send these Yankees to the ALCS.

Entering the ALCS, the Yankees will once again be underdogs against the heavily favored Houston Astros. Regardless of what happens, this season has been a success, and we all know this Yankees team will be back and scarier than ever next year. If, however, the magic remains, the Yankees can continue their miracle run. This series has reminded me just how important it is to remain positive and believe in your team. In light of adversity, this Yankees team responded in a big way. As I eagerly await the start of the ALCS on Friday night in Houston, I know that this Yankees team is capable of performing despite the odds being stacked against them. They've shown us what they can do. Let's hope game five is the catapult for an even deeper October run.