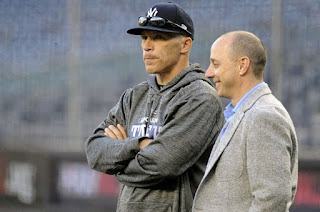 The 2017 New York Yankees were thought of to be a rebuilding club and not much more. While many of the experts picked them to finish in third or fourth in the American League East this season, the Baby Bombers carried a division race all the way until the second to last day of the season, ultimately capturing a Wild Card berth. An exciting postseason run saw the Bombers eliminate the top seeded Cleveland Indians and push the Houston Astros all the way to Game Seven, before ultimately falling short of their 41st American League crown.

With the offseason now upon us, let's play GM to decide the fate of the 2017 New York Yankees. Will Masahiro Tanaka opt out of his deal? Will Joe Girardi and Brian Cashman be given new contracts? Will the Yankees bring back CC Sabathia? How about the logjam of middle infielders and aging DH-types like Starlin Castro, Jacoby Ellsbury and Chase Headley as well as pending free agents Matt Holliday, Michael Pineda, Jaime Garcia and Todd Frazier?

Despite the incredible season, changes will need to be made in order to sculpt this core into a World Series Champion, so let's get started.