Matt Holliday should be the Yankees game five DH

By Unknown - October 10, 2017
Going into the playoffs, there wasn’t a clear designated hitter for the Yankees. The lineup was set for the most part but the DH spot was up for grabs. So far, Joe Girardi has tried a combination of Jacoby Ellsbury and Chase Headley. However, both haven’t produced to expectations. Headley has gone 0-10 dating back to the beginning of the ALDS and Ellsbury has gone 0-8 dating back to the wild card game. The Cleveland Indians have dominated both hitters this series. There needs to be a change if the Yankees want to keep their postseason alive in 2017. There are a few options on the bench, but the Yankees should turn to the veteran Matt Holliday in game five. 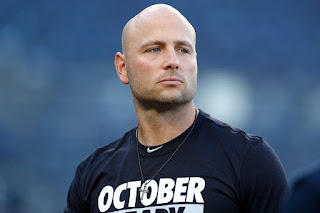 
It was already mentioned that Ellsbury and Headley have been given shots and haven’t produced so the duration of this article will focus on options that haven't been utilized as of yet. That leaves three position players on the active roster. The first player off the bench is Austin Romine who has been pretty solid for the Yankees this year when he’s filled in behind the dish. However, if he were to play, he'd likely catch due to his superior defensive abilities, with Sanchez getting DH at bats. This scenario is quite unlikely.

The Yankees also don’t want to have both of their catchers in the lineup just incase one or both get hurt. I’m sure Ronald “Toe” Torreyes would gladly catch if needed, but I am sure the Yankees would rather not have to do so. Talking about Torreyes, he is another guy that the Yankees could possibly DH. A man like this on the Yankees is great for the team. He brings energy that not many players can replicate. Torreyes has been pretty consistent at the plate for the Yankees this year as he is batting .292. A surprise to many that he has continued to hit to such a high average. However, the Yankees need a utility guy off the bench incase someone gets hurt and Torreyes is that guy. 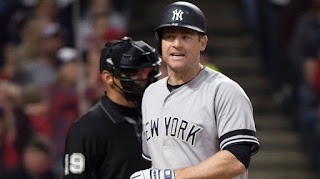 That leaves one guy on the bench and he is a seasoned veteran who has seen the postseason before. Matt Holliday has seen his ups and downs this year, but he deserves a shot. The Yankees are set to face Corey Kluber, who Holliday has never faced in his career.  However, because of the other scenarios, I think it is only obvious to give Matt Holliday a shot. He is a .247 career postseason hitter with 13 home runs and 37 RBIs in just 247 at bats in the postseason. The DH spot is meant for a hitter with power and even though Holliday is now 37 years old, he can still provide that necessary power.

It is not often that a team faces a situation where the DH spot is up for grabs. The Yankees haven’t had this problem in a long time because power hitters for the club were often old and being beat out in the field by younger players. Holliday deserves to play and have this shot to make a mark in the postseason. If he doesn’t produce, so be it. He will look like the other two players who have tried to produce in the DH spot this postseason. I strongly believe that if Matt Holliday is the DH for game five, he will produce and prove to everyone that he still has what it takes to play in October.