Things I've heard throughout this season 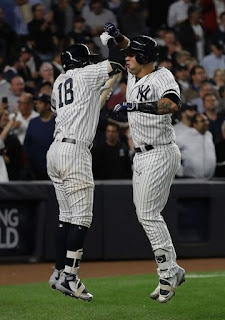 “The Yankees are rebuilding”

"Jose Altuve literally doesn't get out"

“The Yankees don’t play well enough on the road”

“They don’t have the pitching”

“Their bullpen isn't that good”

“CC Sabathia is washed up”

“They need to trade Gardner for some more youth”

“Greg Bird is going to be out for the season”

“Judge just had a good first half, now pitchers are figuring him out”

“Tanaka could be hurt again”

“They should shop Brett Gardner at the deadline”

“Why is Cashman going for it all?”

“Aaron Hicks is cooling off, he was a fluke, he just got off to a hot start”

“They’re too young to compete in the playoffs”

“Severino gets too rattled”

“Whatever, they’ll get swept by Cleveland”

“The Indians are the best team in baseball”

“Kluber is a robot, he’s the best pitcher in the game”

“Kluber shoves in the playoffs”

“Joe Girardi needs to be fired”

“Aaron Judge is an automatic out”

“Judge can’t even put the ball in play”

“Houston is the best team in baseball”

“Chapman can’t close in big games in the playoffs”

“How can you hold the best offense in baseball to two runs in two consecutive games and lose both of them? The Yankees are done”

“The baby bombers can't hit in the playoffs”

“The Astros lineup is too good”

“The Yankees aren’t going to get to Lance McCullers Jr.”

“The Astros bullpen is dominant”

"Ken Giles is a stud"

“The Yankees live and die on the home run”

We're still here… One win away from the World Series.