Win or lose in the 2017 ALCS, this run is the start of something great

By Andrew Natalizio - October 12, 2017
By now you've heard the story hundreds of times. The Yankees were not supposed to be this good, this fast. By all accounts, they might contend for a Wild Card spot this season, but that was as far as the experts were willing to go. Many even had the Yankees finishing third or fourth in the AL East this season.  With a roster full of inexperienced kids and a pitching staff mired with question marks, the Yankees were still thought to be a few years off. 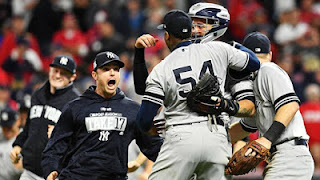 To the surprise of most baseball analysts, and even some Yankees fans, the young core of Baby Bombers more than held their own this season, winning 91 games, securing the first American League Wild Card spot, and competing for the AL East crown until the 161st game of the season. Aaron Judge and Luis Severino had breakouts of the like none of us could have fathomed, Gary Sanchez and Didi Gregorius put up monster seasons despite both missing almost all of April, and General Manager Brian Cashman pulled off a few key trades to bring in difference makers in the form of Sonny Gray, David Robertson, Tommy Kahnle and Todd Frazier.


This season has not been without trials, however. Michael Pineda went down with a torn UCL in July that required season-ending Tommy John Surgery. Dellin Betances struggled with mechanical issues all season long. Aroldis Chapman looked lost for an extended period of time, losing the closer role at one point. Aaron Judge went through a miserable slump post-All Star Game that lasted until September. Consensus Opening Day Ace Masahiro Tanaka had the worst season of his professional career.  Tyler Clippard struggled mightily out of the bullpen before he was eventually shipped to Chicago.  CC Sabathia had two separate stints on the disabled list. Greg Bird battled an ankle injury most of the season and the Yankees were forced to play the likes of Chris Carter, Ji-Man Choi and Rob Refsnyder in his place until Chase Headley assumed first base duties following the acquisition of Frazier.  Both Aaron Hicks and Starlin Castro missed extended periods of time with oblique strains.

No, the Yankees seemingly had the deck stacked against them all season, but they willed their way through it all to reach the American League Championship Series for the first time in five years. Greatness was expected of this team, but that greatness wasn't to be fulfilled for another year or two. Joe Girardi and his staff, in spite of the times they've made us want to pull our hair out and call for their jobs, beautiful managed every challenge thrown at this team and got them to where they are today.

The 2017 New York Yankees are in many ways reminiscent of the 2015 Chicago Cubs. If you recall, that young Cubs roster followed a very similar story arc to this year's Yankees. They both carried a young and feisty roster that qualified for the playoffs a year ahead of schedule. They both won their respective league's Wild Card Game to advance to the LDS and take on the number one overall seed in the league that year. They both pulled off incredible upsets against a 100 win team in a series in which few gave them a chance.


Now of course, the 2015 Cubs went on to get swept by the Mets in the NLCS that season, but the promise that squad showed carried them all the way to the World Series the next season en route to breaking a 108 year Championship drought.

For the Yankees, the story is much the same. It is still to be determined how the 2017 American League Championship Series will play out, and by all accounts the Yankees will once again be the underdogs. However, win or lose, this team is set up for greatness in the coming years. The young core is only going to get better and Cashman will have both a fully stocked farm system as well as an open checkbook at his disposal to bring in the necessary pieces to put this team over the top.

And the most exciting part of all? This isn't a short window for potential greatness. The team’s core of players are all aged 27 or younger.  Veterans like Aaron Hicks, Aroldis Chapman, Dellin Betances, Tommy Kahnle, Adam Warren, Masahiro Tanaka, Sonny Gray and David Robertson are all aged 32 or younger. Gone are the days of the bloated contracts to players on the wrong side of 35. Only CC Sabathia, playing out the last year of his contract, meets that standard. The Yankees are loaded with young players under team control for years to come as well as a fleet of young studs in the minors - namely Gleyber Torres, Justus Sheffield, Chance Adams, Miguel Andujar, Billy McKinney, Estevan Florial and Domingo Acevado - waiting in the wings for their chance.  The Yankees can potentially be perennial World Series threats for the next decade. I cannot stress how exciting it is to be a fan of this team at this time.

Whether or not the Yankees find success for the remainder of the 2017 postseason, the future is bright.  This team has unfinished business this season, but even if they fall short of the ultimate goal, the next few years might just yield the rise of a new dynasty. The Yankees are positioned for both short term and long term success, and I cannot wait to see what the future holds.  For now, it’s on to Houston, but boy is this only just the beginning.