By Andrew Natalizio - November 15, 2017
As the Yankees slow and steady stream of managerial interviews progress, a new name has recently been thrown into the ring: that of current San Francisco Giants Bench Coach Hensley Meulens.

Meulens has not yet actively served as bench coach - having spent the previous eight seasons as the primary hitting instructor for the Giants, winning three World Series.  However, he was recently promoted to bench coach as a sign that the team values his leadership skills and sees him as a manager one day; either in San Francisco or elsewhere. 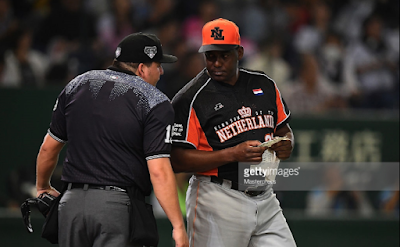 While Meulens does not yet have any Major League Baseball managing experience, he recently led Team Netherlands to a fourth-place finish at the 2017 World Baseball Classic.  His ability to captain the young, upstart team all the way to the semifinals put his name on the map of executives around the league.

Said San Francisco General Manager Bob Evans at the GM Meetings last night: “We wouldn’t hold him back”, when asked about the potential of Meulens interviewing for managerial jobs outside the organization. While he was on a course to potentially replace Bruce Bochy a few years down the road, the Giants will not restrict Meulens from speaking with other clubs this Winter.

Affectionately known as “Bam Bam” within the Giants organization, Meulens is a former top prospect of the Yankees, having played 159 games for the ballclub between 1989 and 1993. Bam Bam is accredited with a high baseball IQ and strong communication skills with his players.  Evans has used the terms "great mind" and "great presence" to describe Meulens, who is also fluent in five languages. He reportedly is very close with Yankees shortstop Didi Gregorius after managing him during the WBC this past spring.

Meulens is scheduled to interview with Brian Cashman later this week after the conclusion of the GM Meetings in Orlando.