By Nick Scott - February 27, 2018
With 2018 spring training now in full swing, we continue to dive deeper and deeper into our Pinstripe Previews at BBB. Today's feature will focus on 2017 trade deadline addition, Sonny Gray.

The 28-year-old right-hander was acquired from Oakland at last year's trade deadline for what many considered to be another fantastic Cashman deal. The Yankees sent rising prospect Jorge Mateo alongside injured prospects James Kaprielian and Dustin Fowler to Oakland in exchange for Gray. The latter two certainly have quite a bit of upside, however each were in the midst of recovery from serious injuries with Kaprielian having undergone Tommy John and Fowler recovering from a ruptured patellar tendon. We certainly wish both a complete recovery and successful careers, but the Yankees felt comfortable parting ways with them to acquire a pitcher in Gray, who had been an ace in past years. 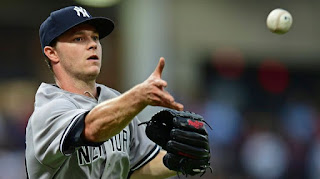 
2017 Review
As mentioned, Gray was acquired at the trade deadline of 2017, thus he split time between Oakland and New York. Here's a quick snapshot of the numbers he posted last year:


Gray was solid in the month of August for the Yankees after the acquisition, posting a 2.70 ERA in 30.0 IP, but he struggled in September, posting a 4.58 ERA in 35.1 IP. The long ball seemed to plague Gray in the latter month, as he surrendered nine HR as opposed to the two HR he allowed in August.

Overall, Gray was 4-7 with the Yankees and in all likelihood wasn't quite the difference maker the Yankees were looking for during the regular season and wasn't a huge factor in the postseason either.

Gray made two starts for the Yankees in the postseason, Game 1 of the ALDS against the Indians and Game 4 of the ALCS against the Astros.

Gray turned in a short outing against Cleveland allowing 3 ER in just 3.1 IP while surrendering three hits and 4 walks. Gray was ultimately tagged with the loss as a result of the short and ineffective start.

Gray fared much better in his second start, as he held the Astros to just three total baserunners in 5.1 IP of one run ball.

All in all Gray wasn't exactly bad for the Yankees in 2017, but I do think the team hoped he would bring a little more to the table in terms of being a difference maker down the stretch and in the postseason. The good news is this trade was made with not only the short term in mind, but the long term, as Gray is under team control until 2020.

2018 Outlook
Despite my 2017 analysis painting a largely disappointing picture, I fully expect Gray to rebound in a big way in 2018. Gray spent all of 2016 and the start of 2017 battling injuries and I have to believe that had a lot to do with any struggles he had this past year. When healthy, Gray has been nothing short of spectacular. Check out his stats from 2014 and 2015, years where he had no injury problems:

It's fairly evident Gray is a workhorse when healthy, having topped the 200 IP mark both years with sparking ERA's to boot. Sure, the FIP suggests he may have been helped by the spacious confines of the Coliseum in Oakland, but the point remains that Gray can eat innings in an effective manner, something that will be crucial for the Yankees in 2018.

I think it's also fair to take into account that the change of scenery may have had some effect on Gray's comfort and routine - remember ball players are creatures of habit, especially pitchers - and now Gray knows what to expect with his team for 2018. Something that doesn't get a lot of attention either is the fact that Larry Rothschild has done a fine job with the Yankee pitchers in recent years and getting a full spring training in with Gray should benefit him greatly.

A full year removed from battling any injuries, I believe Gray will be back to his old, dominant self in the form of another 200 IP, alongside a low 3.00's ERA and a little under 200 K's. In an article last week I went so far as to say he will be the best Yankee starter in 2018.

If Severino suffers any negative effects of the highest MLB workload of his career last year, the door is wide open for the best Yankee starter and I think Gray can certainly step up and fill that hole. I'll stop short of saying Gray will win it, but I wouldn't be surprised if he launches himself into AL Cy Young contention this next season. 2018 should be exciting - I don't think we've truly seen what Pickles is capable of doing in the Bronx yet.

All statistics and info courtesy of Baseball-reference.com and Fangraphs.com