By Nick Scott - February 24, 2018
I don't have to tell you that that this offseason in baseball has been slow - painfully slow. MLB fans of all teams have been driven mad by the dull proceedings this winter and as a result, even the smallest of moves have been met with far greater reaction than necessary. I'm not sure there's any better example this offseason, than of the reaction of Yankees fans to the acquisition of Brandon Drury. 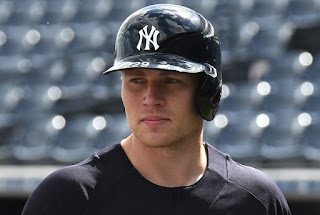 Photo Credit: NJ.com
The Yankees had been linked to Drury earlier on this offseason and on February 20th the team acquired the infielder in a three team deal in which they parted ways with prospects Nick Solak and Taylor Widener. The reaction among most writers here at BBB was that the trade provided a potential upgrade at utility man, but not exactly a player that would be an impact starter.

This doesn't necessarily seem to be the majority opinion among Yankees fans, however. The last few days I have seen multitudes of takes both in article and tweet form that praise this as a sensational pick up and, in some cases, even claim this acquisition is better than that of Giancarlo Stanton. While I don't necessarily think this is a "bad" trade per say, I certainly don't think it will have much of an impact in the chase for World Series 28 this year. In fact, it may be a hindrance should Drury block players like Gleyber Torres and Miguel Andujar from every day playing time. That's what I think this trade ultimately boils down to: Is Brandon Drury really a better long term or even short term option than Andujar or Torres in the infield?

I believe it's most appropriate to first evaluate the player that Brandon Drury is when trying to determine the answer to the question above. Here's a quick chart of what Drury has done at the plate the last two years.

Brutal honesty leads me to admit that these numbers are really average at best. Drury has amassed a lackluster 1.6 WAR the last two years and his value seems to come from batting average alone. A .282 and .267 batting average are decent, but his walk totals are far below average, thus his OBP is nothing to write home about. In fact, Drury tied for the 235th lowest walk total in all of baseball in 2017.

I have seen Drury mistakenly labeled as a player with pop in his bat, but his home run totals don't exactly reflect that. In a year where many believe that the league "juiced" the ball, 117 players hit 20 or more home runs in 2017. That's a ton. 185 players hit more home runs than Brandon Drury in 2017, leading me to question why so many are painting him as a power bat of sorts. At least compared to the rest of the league, he doesn't fit that description.

Drury has spent time at second, third, and the outfield in his big league career and while he hasn't been awful, he's also not the surest fielder in the game. Last year Drury made 10 errors at second base and one error in his one game at third base. To put it in perspective, Starlin Castro made 11 total errors in 2017.

So essentially Drury is a utility infielder whose best asset is his ability to hit for average (Ronald Torreyes anybody?). Nothing more, nothing less. Should this player be starting over Torres or Andujar?

Absolutely not. Torres and Andujar project to have much higher ceilings than Drury and I'll contend they could actually put up better big league numbers than Drury in their first full year in the big league.

With Torres, I feel as though I don't need to plead my case terribly hard. Torres is MLB.com's #4 top prospect (excluding "rookie" Shohei Ohtani) and has been considered a top prospect for years now. The 21 year old rates at a 70 hit tool and 55 power tool which project him to be an elite big league hitter. However, MLB.com's scouting report reads that he's already an advanced hitter for his age with the ability to hit the ball to all fields and superb pitch recognition. The report notes that he could routinely hit north of 20 home runs while simultaneously competing for batting titles. 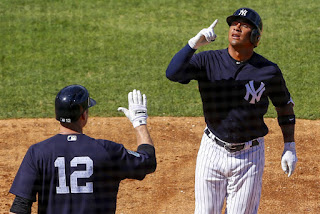 He's also noted to have the range and arm to be above average at shortstop, his natural position, but his athleticism should allow him to be an above average defender wherever he ends up. This lines Torres up well to fill the second base opening left now that Starlin Castro has been traded and with Didi Gregorius doing a more than capable job at shortstop. Once more, I don't feel I need to argue too strongly about why a player with this elite upside should be starting over what we've established to be a decent at best utility player in Drury.

Andujar may be a more difficult task. Yankees fans seem split on the idea of Andujar taking over at third base for the Yankees. Some feel he's a talented prospect that could put up big numbers in the bigs, while others seem hung up on what they feel is a defensive ineptitude that needs improvement  before being given the every day hot corner job in the Bronx.

It's fairly obvious I'm in the first group, so let's begin this analysis with a side by side comparison of Drury's 2017 MLB numbers and Andujar's 2017 minor league numbers.

Let's first address the glaringly obvious: the minor leagues are not the same as the big league. Major league competition is the best of the best, that's why all the best players are there. However, it's worth acknowledging that Andujar hit incredibly well in the minors. As you can see he hit better in every way in the minors than Drury did in the majors in 10 less games.

The point of this exercise isn't necessarily say that that Andujar's minor league numbers make him a superior player, but rather to propose it is no stretch to say Andujar could match or top Drury's offensive numbers in the MLB if given the chance.

As MLB.com's #65 prospect, Andujar rates at a 55 for both hit and power tool which projects him to be an above average hitter and, ironically enough, his highest rated tool is his 70 arm. It's true that he did make 17 errors in the minor leagues last year, but the only way he will improve is by getting more reps and I think his advanced bat should allow him to get those reps at the big league level. Remember, we've established that Drury isn't exactly a sure thing defensively either. 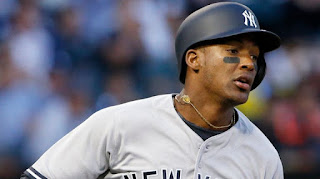 In the end I think the Yankees need to consider who the best players for second and third base are both in the short and long run. Simply put, Torres and Andujar could could easily match the production you could get by starting Drury and would be good bets to actually exceed said production. We've seen what Drury can do and it's hardly inspiring. Let's see what two premiere talents can do when given the chance.

In recent years the Yankees have made a serious commitment to acquiring young talent and their decision to give said young talent a shot has paid off immensely, as Gary Sanchez and Aaron Judge have produced better than they could've ever imagined. I understand that not everyone will come up and immediately be an elite player like those two, but it's important to keep in mind that Torres and Andujar are top prospects for a reason. They've got talent.

In the end, Drury is a fine acquisition if the team is looking for an upgrade at utility man - he seems to be at least a slight upgrade over Ronald Torreyes. Also, if the Yankees were looking for someone to cover second base while Torres almost certainly spends a few weeks in the minors to open the season, that's fine as well. However, it's important to keep it in perspective that Torres and Andujar are the future and we shouldn't make Drury out to be more than he really is. As mentioned earlier, the overhype surrounding the acquisition is understandable - Yankees fans want to be excited about something outside of Stanton. In the end though, the idea of both Yankee youngsters starting over the newly acquired Drury should be what Yankees fans are excited about.