By Unknown - February 18, 2018
I've made no secret that Clint Frazier is one of my favorite players. The way the kid plays, his hustle, his love of the game, his charisma (which fits perfectly in NYC), and, of course, his bat speed are dynamic components of his game. While the addition of reigning NL MVP Giancarlo Stanton is absolutely awesome, it's just another roadblock to Frazier’s playing time. Frazier currently sixth one line for the Yankees in the outfield depth chart, though, personally I'd rank him higher than Ellsbury, but my opinion is biased. 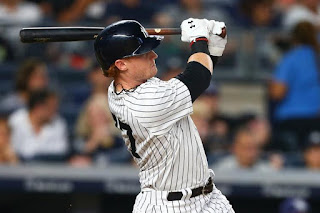 Frazier will have a role on the Bombers in some degree this season. Someone will get hurt: Aaron Hicks spent time on the DL twice last season; Ellsbury is always good for a trip or two to the DL.

Frazier was quoted recently as saying he told manager Aaron Boone that he can play some CF. I love the kid’s attitude. He just wants to play and be a part of the Yankee dynasty.

Frazier told the YES Network, “My eyes are not set on Triple-A.” He's hungry to prove he belongs, and if given another opportunity he will show that he does. Barring a spring training injury or dismal spring showing for one of the five outfielders ahead of him, he'll be ticketed for Scranton for now, however, Frazier is playing with a giant chip on his shoulder and a determination that is unmatched.