By Matthew Luzzi - March 12, 2018
LOOKOUT; THIS ONE IS GONE! Ken Singleton’s signature home run call is one that I and many Yankee fans around the world enjoy hearing from time to time when Michael Kay has a series off, yet this is the last year we will be hearing that call, and it is also how he began his post on Twitter Monday morning, announcing that the 2018 season will be his final season in the booth. 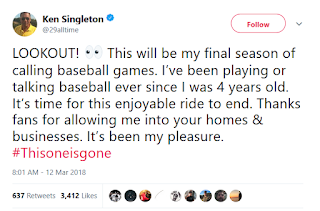 The news came as a bit of a surprise, as Singleton is not only the longest tenured Yankees analyst, being a part of the YES team since 1997, but was also in the booth well before that, originally being a member of the Expos and Orioles broadcasting teams, both teams he played for.

In fact, many of the younger fans of the team have no idea how great of a baseball player Kenny was back in his day. Singleton was a thrice an All-Star, compiled 2,029 career hits, 1,065 runs batted in, a winner of the prestigious Roberto Clemente award, won a World Series and two pennants with the Orioles in 1983, and is also a member of their Hall of Fame.

Singleton was born in the city and grew up in Mount Vernon New York, and despite never playing for the Yankees, he always felt like one, and there will not be many dry eyes at home during Singletons final call. Singleton ended his post on Twitter with nothing but class and respect for the fans, “Thanks fans for allowing me into your homes & businesses. It’s been my pleasure. #Thisoneisgone”