By Ryan Thoms - March 27, 2018
Growing up most young boys and girls think of Superman, Batman or Captain America as superheroes. For children in the 1920’s their superhero was Yankees' right fielder Babe Ruth. “The Great Bambino” played for the Yankees from 1920-1934 and cemented himself as arguably the greatest player of all time. He finished his career with 714 home runs good for third all-time behind only Barry Bonds and Hank Aaron; 659 of those home runs came as a member of the Yankees and that is still the franchise record. 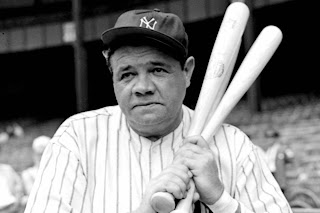 Ruth started his career as a member of the Red Sox and established himself as one of the top pitchers in the game, who also had quite a bit of power. He was part of Boston’s World Series teams of 1915, 1916 and 1918.  After leading the league in home runs and RBI’s in 1919 Red Sox owner Harry Frazee sold his promising young player to the New York Yankees for $125,000 to produce a Broadway musical. The Red Sox would go 86 years before winnings a championship again, thus becoming known as the “Curse of the Bambino.”

Ruth’s first season in pinstripes was a successful one as he hit 54 home runs and drove in 135 runs to lead the league again. He would follow that season up with a magnificent 1921 season in which he hit 59 home runs, that would be the new major league record, one that many in the game including Ruth himself didn’t think would ever be surpassed.

Two years later the Yankees won their first ever championship and he once again led the league in homeruns in RBI’s with 41 and 130 respectively. The “Sultan of Swat” had another stellar 1924 season and an injury plagued 1925 (albeit still impressive). It was during this time Ruth’s home run record was broken… sort of. In the Pacific Coast League a young second baseman named Tony Lazzeri hit 60 home runs in a season, Lazzeri would of course go on to become Ruth’s teammate in 1926 and be a part of the famer “Murderers Row” lineup.

Speaking of “Murderers Row,” they’re best remembered for the 1927 season which saw the team go 110-44 and easily sweep the Pittsburgh Pirates in the fall classic for their second championship. 1927 resulted in George Herman Ruth going from a great player, to a legend, to a superhero, and then to the baseball god that we revere him as today. Babe hit 60 home runs, shattering his previous record of 59. He drove in 165 runs, which was second only to his teammate and the AL MVP Lou Gehrig who finished the season with 47 home runs and knock in 173 (some say 175, there’s some debate on that statistic). Ruth benefited having Gehrig right behind him in the order, but also the two guys who hit in front of him Earle Combs and Mark Koenig as they were always on base. Ruth drove them in and then Gehrig along with Bob Meusel and Tony Lazzeri would finish the job. Together those six formed “Murderers Row,” but it was Babe whose star shined the brightest. The team combined for 158 home runs, the Philadelphia Athletics had the next most as they finished with 56, four less than Ruth hit. In fact, Babe out blasted every single team in baseball with the exception of the Yankees. The Bombers followed up their impressive 1927 winning again in 1928.

Babe and his Yankees also captured the World Series in 1932 the last of his career and seventh overall (three with Boston and four with New York). Following the 1934 season, Babe went to the Boston Braves where he played his final year and hit the last six home runs of his professional career.

In 1961, another Yankee Roger Maris broke Ruth’s record when he launched his 61st home run into the stands. Babe Ruth died in 1948 and never knew his record was broken. He died as the all-time home run king. Maris, ever the humble gentleman told Ruth’s widow after he hit the record breaker “No one will ever replace your husband.” Maris was spot on; the name of Babe Ruth is baseball royalty. He’s still looked upon as the pinnacle of power and his 60-home run performance of 1927 is the reason why. His monument reads “A Great Ball Player, A Great Man, A Great American”, simple and straight to the point. Babe swung a heavy bat, had a big personality, and was larger than life physically and in the hearts of the children and fans who got to see his majestic home runs leave “The House that Ruth Built.”