By Andrew Natalizio - April 12, 2018
Amidst the Yankees' recent offensive struggles, Aaron Judge, hitting in the number two hole in the lineup, is quietly having a phenomenal start to his sophomore season.  Judge has hit a modest three home runs in the season's first 12 games, however, he is currently sporting a ridiculous slash line of .348/.474/.627 to go with one stolen base and eight runs batted in.  He's not lighting the world on fire at this point, but he has been every bit as good as Didi Gregorius in an otherwise subdued New York Yankees lineup. 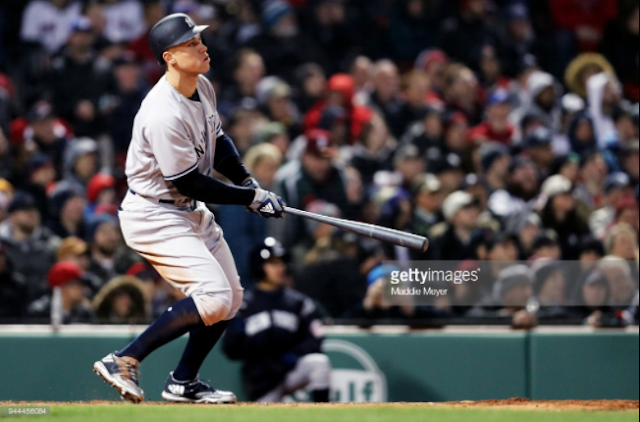 Yes, Judge is still striking out. He has already whiffed in roughly one-third of his ABs this season (15 times in 46 at-bats), but his production has far and away accounted for his strikeouts as well as MLB-leading five GIDPs. His K% (strikeouts divided by plate appearances) of 26.3% ranks just 47th highest in baseball and his wRC of 13 is tied for second best in all of baseball, trailing only Bryce Harper of the Nationals. He has continued to display his patented plate discipline as well, sporting a Swing % of just 36.5%, which is the third lowest among all right fielders and 24th lowest in all of baseball.

The Yankees offense, prior to last night's breaking out against David Price and the Boston bullpen, had hit a huge snag, with 2017 National League MVP Giancarlo Stanton as well as Gary Sanchez as the leading offenders. But Judge has quietly reached base in almost half of his at-bats and his OPS+ of 197 indicates that he's been almost twice as good as a league average player.  And, oh yeah, he's still posting absurd Statcast statistics.


Judge isn't only doing it at the plate, either.  Just last week he made an incredible catch at the wall to rob Caleb Joseph of the Orioles of an extra innings, go-ahead home run.  The Yankees ultimately lost the game in 14, but Judge's heroics gave the team a chance to win it in the bottom of the inning.


Judge began the season 2-for-12 (.167) with one double, one RBI and three of his five GIDPs over his first three games but has since been arguably the most consistent hitter in the league, hitting at a .412/.545/.706 pace.  Judge has recorded multiple strikeouts in five of his 12 games, but that has in no way prevented him from proving that last year was no fluke. New York's big boppers haven't hit their stride yet, but Judge is more than doing his part getting on base and setting up RBI opportunities for Stanton, Sanchez and Didi Gregorius.  Once those sluggers come around, the New York offense will soar and Judge could be in line for even bigger numbers than he's putting up already.   Yes, we're only 12 games into a 162-game marathon, but all signs point to Judge having anything but a sophomore slump in 2018.