By Andrew Natalizio - April 29, 2018
On the heels of an emotional, come-from-behind win last night, the Yankees turned to Masahiro Tanaka to keep the ball rolling.  Opposing Tanaka was RHP Garrett Richards for the Angels.  Both Tanaka and Richards had strong starts their last time out, with both earning the win.  Last night's win was New York's seventh in a row, and after Boston's loss at home to Tampa earlier this afternoon, the Yankees had a chance to pull within two games of the first place Red Sox. Tanaka was sharp all night, Richards didn't get out of the second and New York won its eighth straight by a score of 11-1.

The Yankees wasted no time getting on the scoreboard in the top of the first – and they did so in a big way.  After Brett Gardner struck out to leadoff the ballgame, Aaron Judge singled and Didi Gregorius walked before Giancarlo Stanton grounded a ball to the left side that took a bad hop on Angels' shortstop Zack Cozart.  Judge scored from second after the ball trickled off Cozart's glove into shallow left and the Yankees had a 1-0 lead.  The New York offense was far from done, however.  Immediately after, Gary Sanchez roped a 2-1 pitch down the left field line for a double which scored Gregorius and put runners on second and third for Aaron Hicks.  Hicks would post a productive out, grounding out to the right side which allowed Stanton to score, giving the Yankees a 3-0 lead.  The Yankees got their fourth run of the frame after Neil Walker struck out, but the ball got past Angels' catcher Martin Maldonado. Walker beat the throw to first and Sanchez scored. Next up was Miguel Andujar who ripped a double to deep left center field which scored Walker for the fifth and final run of the frame. Tanaka countered with a nine pitch 1-2-3 bottom of the first. 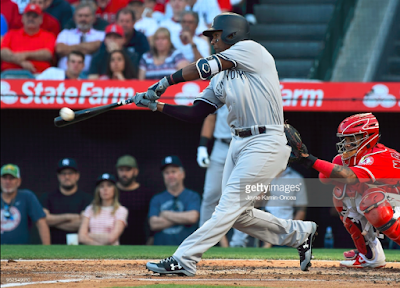 The Yankees put the game away early in this one, tacking on three more runs in the second off Richards courtesy of a Gardner walk, Judge RBI double, Sanchez walk and Hicks two-run triple. Richards' night was done after 1.2 innings and the Yankees had a commanding 8-0 lead. Eduardo Paredes game on in relief of Richards and proved no improvement.  He was immediately tagged for three singles off the bats of Walker, Andujar and Torres and before the inning was over, the Yankees had a 10-0 lead. Tanaka struck out the side in the bottom of the second.

The Angels would get their first hit of the ballgame when Mike Trout led off the fourth with a single to left, but Tanaka would rebound by striking out Justin Upton, Albert Pujols & Luis Valbuena, his second time striking out the side and had tallied seven Ks through four. Tanaka would allow his first run the following inning, a solo home run off the bat of Cozart, but would retire the next three hitters and tally his eighth strikeout of the ballgame.

The Yankees' offense tacked on another run in the eighth, but otherwise failed to do much after their early two inning, ten-run outburst. However, six strong innings from Tanaka and solid relief work from Chasen Shreve and recently acquired A.J. Cole was all the Yankees needed in this one.

Next Up:
The Yankees look for the three-game sweep of the Angels and their ninth straight win tomorrow night on ESPN Sunday Night Baseball before they head to Houston for an ALCS rematch with the World Champion Astros.  Tomorrow's pitching matchup features a pair of southpaws: CC Sabathia (1-0, 1.86) will go for New York, opposed by Tyler Skaggs (3-1, 2.96). First pitch is scheduled for 8:07pm.