By Andrew Natalizio - April 26, 2018
The Yankees entered Thursdays game looking for a four-game sweep of the Twins and their sixth straight win overall.  It was Jordan Montgomery taking the bump against Kyle Gibson for a matinee in the Bronx. Gibson pitched great as he took a no hitter into the sixth inning, completely shutting down the Yankee bats.  The Yankees never gave up though, as they rallied back from down 3-1 in the ninth, when Gary Sanchez hit a three-run walk-off home run, giving the Yankees the win. 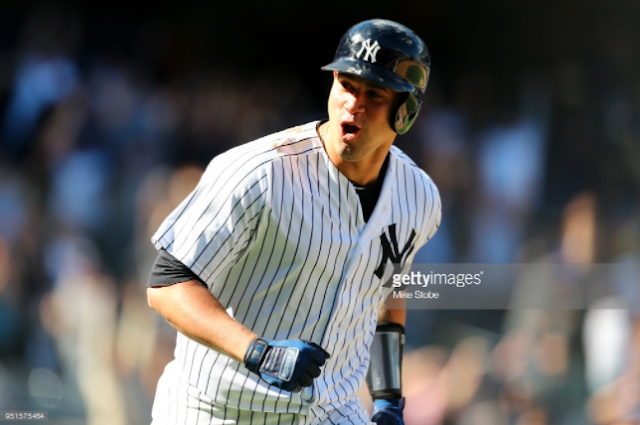 Eduardo Escobar opened the scoring with a two-run home run in the top of the third, scoring Miguel Sano.  The Yankees first baserunner came in the bottom of the fourth when Brett Gardner drew a four pitch walk, but was then picked off as his hand came off of the first base bag for just a second, and Sano held the tag down the whole time.

Domingo German came on in relief of Montgomery in the top of the sixth.  Germain surrender a solo shot to Robbie Grossman extending the Twins lead to 3-0.  In the bottom of the sixth Brett Gardner finally put the first Yankee hit on the board with a single up the middle.  Judge followed that up with a walk, putting two men on with two out for Didi Gregorius. Didi would fly out to center ending the inning.

Addison Reed came on in relief of Gibson in the bottom of the seventh, and surrendered a lead off double to Giancarlo Stanton.  After Gary Sanchez popped out, Stanton advanced on a wild pitch. Aaron Hicks then flew out to deep center, scoring Stanton.  Reed then struck out Tyler Austin ending the inning. The Twins brought in left hander Zach Duke in the bottom of the eighth and he allowed just an infield single Gleyber Torres.  Dellin Betances struck out the side in the top of the ninth, keeping the Twins lead at 3-1.

Didi led off the bottom of the ninth reaching on an error, bringing up Stanton who hit a slow roller to third, resulting in an infield single.  With two men on and nobody out Gary Sanchez came to the plate with a chance to end the game and he did not disappoint. Sanchez hit a long three run walk-off home run to left, keeping the Yankees winning streak alive.


The Yankees will start a three-game set with the Angels in Los Angeles tomorrow night.  It will be Luis Severino facing off against Andrew Heaney for a 10:07 ET first pitch. The Yankees will be going for their seventh straight win and are now only 3.5 games back of Boston for the lead in the A.L. East.