What exactly is wrong with the Yankees' bullpen?


When the 2017 season began, a common opinion about the Yankees was that their bullpen would be a strength.  Many thought that there was a chance the Yankees’ bullpen in 2018 would be the best ever, and there was good reason to think so.  A group made up of flamethrowers Aroldis Chapman, Chad Green, and Tommy Kahnle, stalwarts David Robertson and Adam Warren, as well as four time All-Star Dellin Betances was one that, on paper at least, was arguably the best in baseball.  However, throughout the first 14 games of the season, the majority of Yankee relievers have not yet lived up to their potential.


Back in February, the BBB’s own Shawn Maguire wrote that the Yanks’ success would be built on their bullpen, and through the first two and a half weeks of the season, this could not be more true. While Chapman and Green have looked pretty solid this year, outside of some hiccups, Betances, Kahnle, Robertson, and Warren have all had varying levels of ineffectiveness.  I won’t waste time analyzing Jonathan Holder or Chasen Shreve, because I don’t think anyone expected either of them to be anywhere near as effective as the others.

The Bombers have already lost seven games on the young season, and four of these were lost by the bullpen: the final two games in Toronto, and the two extra-inning games against the Orioles at Yankee Stadium (although the offense didn't do much to help in extras, either).  This, however, does not even tell the whole story: the bullpen as a whole has given up 30 runs in the 14 games and 57.1 innings pitched.  That’s the fourth highest total runs allowed in baseball, behind only the Reds, Pirates and Marlins…three teams who are not supposed to be successful in 2018.  So what exactly is wrong?

First off, let’s talk about everyone’s favorite scapegoat: Dellin Betances.  In 6.2 innings so far, Dellin’s numbers are…well, not good: a 8.10 ERA, three homers allowed, three walks, 12 strikeouts, and ten hits in total.  A few things stand out to me here.  First off, he’s been much more hittable to start the year.  Dellin’s main problem in the past has been throwing strikes, as evidenced by his struggles in 2017 (44 walks in 59.2 innings).  Bases on balls have not been the problem though, in fact, it may be just the opposite; he’s throwing too many strikes.  This is why batters are teeing off on him.  Dellin gave up three homers ALL of last year, and he’s already given up three this year.  Friday night’s game supports this perfectly.  He recorded only two outs in the eighth inning while facing seven batters, allowing five hits, three runs, and striking out two.  Dellin has essentially over corrected his woes from last year, and as a result, he has been wildly ineffective.  All hope is not lost, however.  If he can find some sort of middle ground between being incredibly wild and incredibly hittable, he could return to his old, dominant form.


As for Robertson and Warren, neither of them have been especially good in 2018, but they haven’t been as brutally bad as Betances and Kahnle.  There aren’t many glaring differences between their past performances and 2018 performances, just a few minor ones.  For D-Rob, there doesn’t seem to be much wrong except for one thing: his pitches just haven’t been as good as they normally have. This may sound too general, but here’s the thing; he’s only walked one batter so far this year, so it’s not the walk rate.  However, his strikeout rate is only 8.31/9, which is way down from his career average of 11.94/9.  Robertson, like Betances, has basically just been too hittable so far, but not to the point where there should be a lot of concern.  For now, I’m just going to chalk this up to the cold weather and rust of pitching early in the season, but if this continues, there may be more cause for concern. 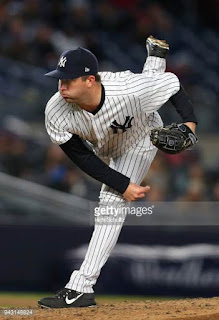 Last, but not least, we have Adam Warren.  If you’ve listened to the Bronx Bomber Babble Podcast, which I highly recommend, you’d have heard that myself and host Matt Luzzi are pretty high on Adam Warren.  In the past, he’s been an incredibly valuable pitcher for the Yankees, and has flown under the radar for years.  In 2018, he’s run into a lot of bad luck -  and I mean a LOT.  In his appearance on April 8, the game the Yankees blew against the Orioles in 12 innings after leading 5-0, he was the losing pitcher.   In this outing, he wasn’t necessarily bad, he just could not get any batters out, which has essentially been the story of this season so far.  His pitches just haven’t been as effective as they normally would be and this has led to an abnormally large ground ball percentage of 71.4%.  While this seems good at first, it also can have negative effects, since a lot of the ground balls have managed to find holes and reach the outfield for base hits.  Warren’s career ground ball percentage is 45%, and I would expect that as the season progresses and the weather gets warmer, Warren’s pitches will be more effective and his luck will be better.  But for now, the defense will need to be on its toes when Warren is on the mound.

There’s not much to say about the Yankee bullpen in 2018 other than the fact that it’s been bad.  Who knows, maybe the ineffectiveness will continue, but all hope is not lost.  However, in order to live up to the preseason hype, changes are needed, as mentioned above.  Dellin needs to throw less strikes (as weird as that sounds), Kahnle needs to throw more strikes, and Robertson and Warren just need to continue to work off the early season rust and perhaps run into a bit of better luck.  For now, the bullpen remains a weakness for the Yankees, but, with a group this talented, there's no reason they can re-write the script and return to the dominant bullpen unit we all expected.