By Unknown - May 15, 2018
This offseason, it seemed like a foregone conclusion that the Yankees would package Clint Frazier in a deal for a starting pitcher. To the surprise of many, such a scenario never came to fruition. With Frazier suffering a scary concussion in spring training and being on the shelf for a while, questions about his future with the organization were temporarily put on hold. However, with Frazier now fully healthy again and raking in the minors, he's doing everything he can to push the Yankees' hand. Aaron Hicks, the starting center fielder, has not been performing at the high level expected of him going into the season. The time has come for the Yankees to, at the very least, strongly consider calling up the 23-year old Frazier to give him a legitimate shot to prove to the organization that he should be in its long-term plans. 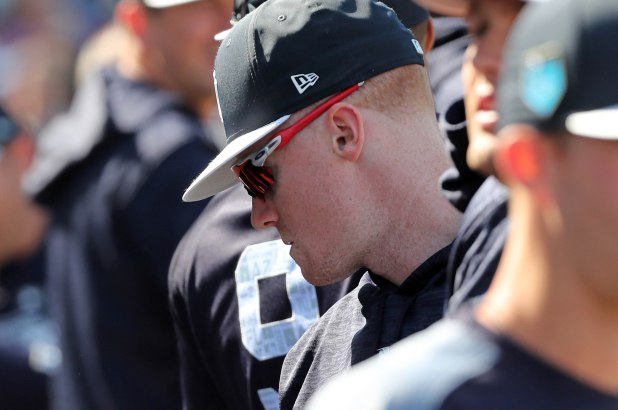 
Aaron Hicks is clearly a talented athlete. He's an elite defender with as strong of a throwing arm as any other outfielder in the majors. Unfortunately, he has failed to consistently perform at a high level offensively. With the exception of a few months last season, Hicks has been a mediocre offensive player at the major league level. Perhaps it is time for the Yankees to come to the realization that the Hicks they saw early last season was the exception rather than the rule. Instead, it seems as if the real Hicks is what we saw in 2016, after he came off of the disabled list in late 2017, and what we're seeing thus far in 2018.

Regardless of how one may feel about Hicks, Frazier is a special talent. The centerpiece of the Andrew Miller trade two summers ago, it appeared that the Yankees envisioned Frazier to be a long-term solution in the outfield. With the acquisition of Giancarlo Stanton and current presence of Brett Gardner, Aaron Judge, and Aaron Hicks, not to mention the oft-injured Jacoby Ellsbury (who we have to assume will come back at some point this season), there does not appear to be a spot for Frazier. It could very well be the case that the Yankees view Frazier as nothing more than a trade chip to be used later this summer when the team will likely pursue a starting pitcher.

Even if we were to hold that the aforementioned premise were in fact true, the point still remains that Frazier can help the Yankees right now. As of May 15, Hicks is batting .215 with three homers, 15 RBIS, and a .704 OPS in 27 games. On the other hand, in 16 games split between High-A and Triple-A this season, Frazier is hitting .323 with four homers, five RBIs, and a 1.054 OPS. Granted, this is a small sample size but the Yankees would well-served by calling him up sooner, rather than later. During his brief time in the majors last season, Frazier hit .231 with four homers and 17 RBIs in 134 at-bats. He also had quite a memorable walk-off home run, showing that he has a flare for the dramatic.

Until Brett Gardner's recent hot streak that began last week agains the Red Sox, I was a proponent of platooning the struggling Hicks and then-struggling Gardner for the time being in center, with Frazier getting a majority of the playing time in left. If, after say a few weeks, Frazier could not take advantage of his opportunity, then the Yankees could have responded accordingly and optioned him  back down to Triple-A, until further notice. Now, however, the Yankees should give Frazier playing time at Hicks' expense. On the other hand, there is a strong argument against calling Frazier up. If the Yankees have already made the decision that Frazier is to be used as a trade piece at the deadline and he struggles in the majors, his stock may decline. Whereas if Frazier were to continue playing well in the minors, the Yankees could sell at an all-time high.

Despite the Yankees abundance of outfielders, I still believe Frazier can be with the organization long-term. Of course, Judge is the starting right fielder for years to come, with Stanton getting the majority of DH at bats, and occasional starts in left and right. Even if Gardner's option is picked up next year, the Yankees should not let Aaron Hicks stand in the way of Frazier getting a shot. Hicks is certainly talented, but with the exception of a few months last season, he has failed to put it together at the major league level. The Yankees would be making a huge mistake if they do not give Frazier a shot to prove himself in the majors for an extended period of time. The time is now to see what Clint Frazier has to offer. After all, this may be the last chance he'll get in a Yankee uniform.