Don't look now, but Dellin Betances is back

By Andrew Natalizio - May 06, 2018
Perhaps lost amidst the Yankees' recent torrid start – one in which they have won 14 of their last 15 games and pulled within a single game of the first place Boston Red Sox – has been the turnaround of Dellin Betances. 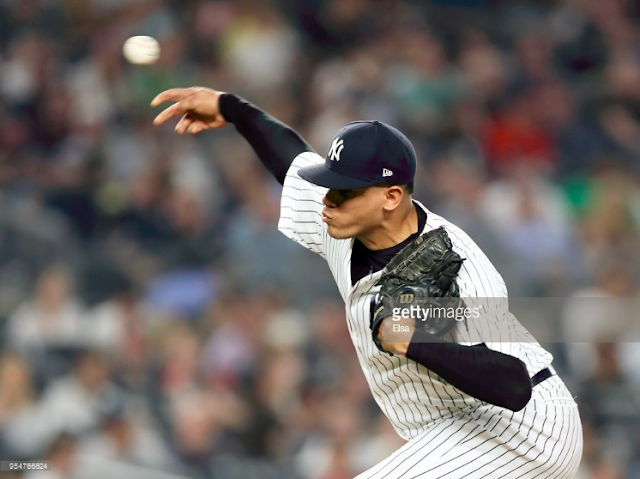 Just three weeks ago, Yankees fans had all but given up on the four-time All-Star.  Dellin's start to the 2018 season was ugly to say the least.  Through his first six appearances, Betances sported a gruesome 8.10 ERA to go along with a .357 BAA, 1.950 WHIP and three home runs allowed. The three longballs matched his entire season total from 2017.  However, Dellin wasn't struggling with his control as much as he had at the end of last season, issuing just three walks in 6.2 IP while striking out 12.

Since that ugly appearance in Detroit on Friday, April the 13th, Dellin has been nearly lights out. In seven appearances since his meltdown in MoTown, Betances has thrown 6.1 innings, allowing only a single (unearned) run, four hits, two walks and 13 strikeouts.  His 0.00 ERA and .174 BAA over that span has dropped his season totals to a much more palatable 4.15 and .275, respectively.  Most encouragingly, manager Aaron Boone hasn't shied from using Betances in high leverage situations, and the tall flamethrower has risen to the occasion just about every single time.  His appearance in Houston this past week was peak dominant Betances.

With both Tommy Kahle and Adam Warren still unavailable on the disabled list, Betances' turnaround has been critical to shoring up Boone's bullpen.  The quartet of Betances, David Robertson, Chad Green and Aroldis Chapman has backed the team's stellar starting pitching over this stretch.  If Betances is able to maintain this form, sporting the type of dominant stuff that has helped him reach the midsummer classic in each of the last four seasons, the Yankees bullpen immediately has to be considered one of the best in baseball again.

Just a few short weeks ago, we as fans didn't know what we had in Dellin anymore. He was a head case who no longer could be counted on to shut the door. Now? Dellin just might be back to the dominant reliever we've come to expect him to be. When he's on, he's arguably the nastiest reliever in baseball. Certainly, at the least, in the conversation with the likes of Colorado's Adam Ottavino and Milwaukee's Josh Hader.  The Yankees can only hope Dellin can maintain this form over the course of the season. If so, he just might be building his resume for a fifth straight trip to the All-Star Game in Washington later this summer.