By Andrew Natalizio - May 16, 2018
There is only one way to describe Neil Walker’s first month in pinstripes – horrendous.

Coming off a strong .267/.409/.433 showing for the Brewers, Walker was a victim of a slow free agency period that saw a league hesitant to hand out large contracts to veteran players.  After spending most of the off-season unemployed, Walker signed a one-year, $4 million contract with the Yankees mid-way through spring training.


Having little time to shake off the rust in his abbreviated spring training, Walker was plugged into the opening day lineup at second base.  It quickly went downhill from there.  Walker finished the month of April with a batting line of .165/.212/.190.  With Gleyber Torres, Miguel Andujar and Tyler Austin off to hot starts and a chorus of boos regularly following his name, Walker appeared destined to return to free agency.

Since the calendar flipped to May, Walker has been sizzling hot at the plate.  Halfway through the month he’s hitting .346 with three doubles and four RBI.  Even more important, he’s drawn eight walks leading to a .514 OBP, putting himself in a position to score nine runs ahead of the two baby bombers stacked behind him in the order.

In addition to his hot hitting, Walker has been a clutch performer in big-time situations, with his 11th inning walk-off single against the A’s on Saturday as the most recent example.  “When we need a big hit, he’s a guy we turn to,” Aaron Judge told the New York Post following the game. 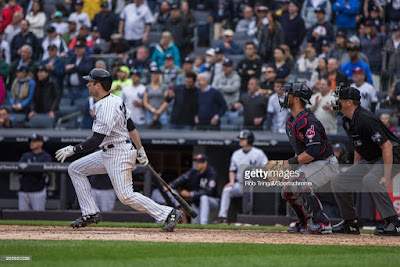 This should not come as a surprise.  Walker brought a nine-season track record of professional hitting with him to the Yankees.  His career OPS+ of 112 is 55th among active players, tied with Eric Hosmer and Adam Lind and just ahead of players like Brian Dozier, Todd Frazier, Nick Markakis and Jay Bruce.

Walker’s hot streak could not have come at a better time.  Greg Bird is slowly making his way back from the disabled list, and the Yankees will have to make another tough roster decision in the coming weeks.

A few weeks ago, the choice seemed easy.  Walker’s days in pinstripes appeared to be numbered.  Austin was hitting .290 with five home runs and 16 RBI through April 26th.  However, Austin’s recent struggles, combined with Walker’s scorching May, might have tipped the balance in Walker’s favor.

Walker’s ability to play first, second and third base provides the Yankees with a utility player who they can comfortably plug in at any time, and as a switch-hitter, Walker gives the Yankees’ righty-dominated lineup some much needed balance against right-handed pitching.

Additionally, Walker provides the young Yankees lineup with another veteran presence.  He has always been viewed as a professional and great clubhouse guy.  Walker’s torrid May and his ability to play three infield positions provides the Yankees with a lot of value.  His veteran leadership skills and boost to the clubhouse are an added bonus.

The real Walker lives somewhere between the April and May versions of the player we’ve seen so far, but, if he’s able to provide versatility, depth and solid leadership, all while producing near his career averages, the Walker deal has an opportunity to go down as another Cashman steal.