By Andrew Natalizio - May 02, 2018
Coming off of Tuesday’s inadvertent “bullpen day”, the Yankees were looking for two things on Wednesday night. Those were early offense and a good pitching performance. Thanks to Giancarlo Stanton and Luis Severino, they got both of those things and the Yankees sailed to an easy win in Houston by the same score as last night, 4-0. 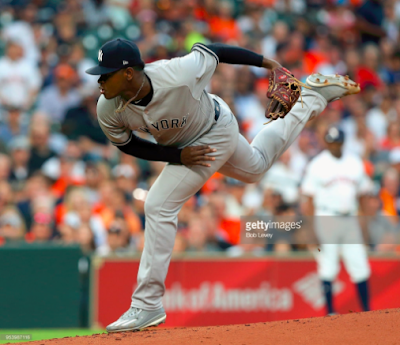 The Yankees seized control in this game early and gave Luis Severino a lead before he even took the mound. With two down in the top of the first, Didi Gregorius worked an eight pitch at-bat before singling to left field. Three pitches later Giancarlo Stanton poked one right into the first row over the right field fence to give the Yankees an early 2-0 lead over nemesis Dallas Keuchel. 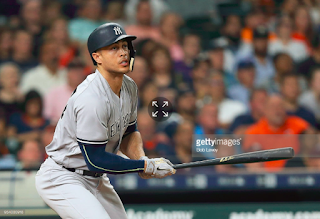 In the top of the fourth it was Stanton with another home run, this one far more Stantonian. He ripped a laser beam over the left field wall for the Yankees third run of the night.

Finally, in the eighth, Stanton added the Yankees’ final run of the night. After Aaron Hicks led off the inning with a double, Stanton came up with two outs and banged an RBI double to right field to complete the Yankees’ scoring. After several false starts this year, we can only hope that Stanton is finally starting to heat up and get in a groove. When he does, the league's number one scoring offense is going to go to yet another level.

"I thought left field was upset that I homered to right field, so I wanted to make things right." -Giancarlo Stanton after his 2nd HR of the night, maybe. #YANKSonYES pic.twitter.com/JDA2Ysuv9z
— YES Network (@YESNetwork) May 3, 2018

While all that was happening on offense, Luis Severino was dominating the reigning World Champions. Severino pitched a complete game with 10 strikeouts and just one walk. It was as dominant a performance as you can hope to get from your ace and considering that it came on the road against the champs from a 24-year-old, it's all the more impressive. We only need to hope for health for Sevy this year. When he's out there he's as good as any pitcher in the league.

Other than that, it was a pretty boring game. The Yankees big offseason addition paid off as they went into Houston and conquered long time Yankee killer Dallas Keuchel. The Yankees will definitely have to face this team if they hope to reach their goals this season so building confidence against them, especially in this ballpark, is key, even if it is only May 2nd.

What's Next?:
The Yankees and Astros will complete their series tomorrow afternoon as the Yankees look to win the series before they head home. First pitch is at 2:10 pm on the YES Network and the probable starters are Masahiro Tanaka (4-2, 4.37 ERA) for the Yankees and Lance McCullers (4-1, 3.71 ERA) for the Astros.