The case for Austin Romine as Sonny Gray's personal catcher

By Andrew Natalizio - May 10, 2018
Aaron Boone was hesitant to make the move at first, and understandably so. The New York Yankees have arguably the best hitting catcher in baseball in Gary Sanchez, so ideally Boone would like to get him into the lineup as much as possible. However, in a game where raw statistics are so important, it is hard to argue with the numbers, and the numbers say that Sonny Gray is a better pitcher when Austin Romine is behind the plate laying down the signs. Even if it means giving Sanchez a few more off days than you would like, there is a strong case for Romine being Gray’s personal catcher.


The idea of a personal catcher is not foreign to the Yankees organization. Randy Johnson, though not the same pitcher with the Yankees that he had been throughout the rest of his career, was very fond of John Flaherty, to the point where Joe Torre made sure the back-up Flaherty was behind the dish every time the big lefty took the ball. A.J. Burnett, another premiere offseason pitching acquisition by the Yankees, also preferred throwing to the back-up, in his case Jose Molina or Francisco Cervelli. The fact that these two power arms preferred throwing to the back-ups instead of Jorge Posada was by no means a knock on the Yankee legend. In a game that is more mental than any other major sport, their preference could have been nothing more than a mental block they could not get past.

Regardless of how you feel about personal catchers, the numbers in Johnson and Burnett’s cases do not lie.  Johnson, a Hall of Famer, looked like his dominating self when throwing to Flaherty.  In 21 starts with Flaherty behind the plate, Johnson pitched to a 3.18 ERA, allowing just 110 hits and 25 walks in 135.2 IP.  When you compare those statistics with the numbers he posted with Posada behind the plate, the difference is staggering.  In 43 appearances pitching to Posada, Johnson posted an inflated 4.82 ERA while allowing 250 hits and 75 walks in just 261.2 IP.  To put it lightly, Johnson was a different pitcher when Flaherty was calling the game. Burnett also enjoyed far less success with Posada behind the plate, posting an ERA nearly two full runs lower when he threw to Molina or Cervelli (worth noting: a bulk of Burnett’s numbers with Cervelli behind the plate come from their time working together with the Pittsburgh Pirates).

Clearly there is statistical data that supports the notion of a personal catcher, whether you buy the idea or not. So, is there really enough information at this point to justify Boone slotting Romine into the lineup every fifth day? While Gray’s sample size with Romine and Sanchez is not large enough to be definitive, like it was for Johnson and Burnett, it is convincing. Since coming over to New York in a trade with Oakland at the 2017 trade deadline, Gray has appeared in 18 games for the Yankees, pitching to Romine eight times and Sanchez 10 times. Despite throwing just over seven more innings to Sanchez, Gray’s numbers when pitching to the two backstops are diametrically opposed. 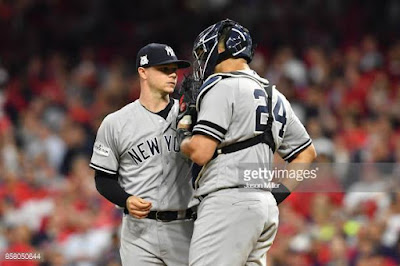 The Sonny Gray we see when Gary Sanchez is behind the plate is the Sonny Gray who has drawn the ire of Yankee fans since last summer. It is important to note that fans had high expectations for Gray when he donned the pinstripes, being that he is a former All Star and once placed third in American League Cy Young voting during his breakout 2015 season with the A’s. This is not the Sonny Gray we see when Sanchez is calling the game. When throwing to Sanchez, Gray has posted an abysmal 5.94 ERA. Maybe more concerning, opposing batters are hitting .258 with a .342 OBP against Gray when Sanchez is behind the plate. Gray has allowed more than a hit per inning and has struck out just 42 batters in 53 IP.

So how much better is he when Romine dons the catcher’s gear? Safe to say, Gray certainly looks more like his 2015 form when throwing to the back-up. In his eight regular season appearances throwing to Romine, Gray is posting a stellar 2.78 ERA while holding opposing hitters to just a .217 average. His strikeout totals are also far better when Romine is behind the plate, as he has struck out 47 in just 45.1 IP.

Based on the numbers, it is hard to argue that Sonny Gray is as effective when throwing to Sanchez as he is when he throws to Romine. The source of concern then becomes the difference in offensive production between the two Yankee catchers. There is no doubt that Sanchez is the superior hitter between the two. While Sanchez has been one of the best hitting catchers in baseball since earning the call to the big leagues, Romine’s offensive numbers aren’t particularly close when you compare the two at the plate. However, you also have to consider one of the most beautiful elements of playing in the AL, the designated hitter.

While it should be a priority for Boone to get Sanchez in the lineup as often as he can, this is still possible with Romine behind the plate because of the DH spot. In his career, while Sanchez has racked up far more at-bats while catching than while DH’ing, his numbers are about the same. Sanchez bats about .010 points lower and, on average, drives in fewer runs when DH’ing, but his power numbers and hit totals match-up almost perfectly. On top of the fact that Sanchez’s production does not seem to suffer greatly when he is in the DH spot, there is precedent for teams limiting the time behind the plate for young offense-centric catchers (see the Twins and Joe Mauer or the Cubs and Kyle Schwarber).  With Sanchez clearly being the Yankees catcher for years to come, there is incentive to limiting his time behind the plate in order to preserve his bat.

On the other side, while he is still not a hitter who puts fear into the hearts of opposing pitchers, Austin Romine has made big strides at the dish in 2018. After batting just .218 in 80 games in 2017, Romine has bumped his average up to .286 in 13 games so far this season. Romine also has three extra-base hits and seven RBIs so far this year, compared to just 12 extra-base hits and 21 RBIs all of 2017. While there is still no argument that Romine is at Sanchez’s level offensively, the 29-year old catcher does not seem to be a liability at the plate like he was in the past. Aaron Boone himself has said that he and the Yankees coaching staff have high offensive expectations for their back-up catcher.

Determining whether Sonny Gray should exclusively throw to Austin Romine is a balancing act. You have to balance the difference in ERA for Gray versus the offensive production of Sanchez and Romine. While there is no formula for definitively figuring out which is the better option over the long-term, you can look at the difference in Gray’s ERA between the two catchers and ask yourself, “Can Gary Sanchez make up for those runs with his bat every time he catches Gray?” There is more than a three-run difference in ERA for Gray when he pitches to one or the other, and it is hard to fathom Sanchez, as good as he is, producing three-plus runs every time he catches Gray. When you do a cost-benefit analysis here, there doesn’t seem to be any doubt that Austin Romine should be catching Sonny Gray when it’s Gray’s turn to take the ball, even if it means Gary Sanchez has to ride the pine every so often.