By Andrew Natalizio - May 09, 2018
Amidst some recent struggles from veteran Brett Gardner, some Yankees fans might find themselves watering at the mouth of the idea of replacing Gardner with free-agent megastar Bryce Harper next season.  Yes, the Yankees have prospects Clint Frazier, Billy McKinney and Estevan Florial waiting for their chance with the big-league club, not to mention the albatross and seemingly immovable contract of Jacoby Ellsbury, but since the CBA restructure a few years ago and the team's ability to get under the Luxury Tax threshold this season, the Yankees always had their eye on Harper for next offseason.  However, there's another player, who doesn't get much hype playing on the West Coast, who might be an even better fit for the Yankees, and that is the reigning National League Player of the Week and April NL Player of the Month: Arizona Diamondbacks' centerfielder A.J. Pollock. 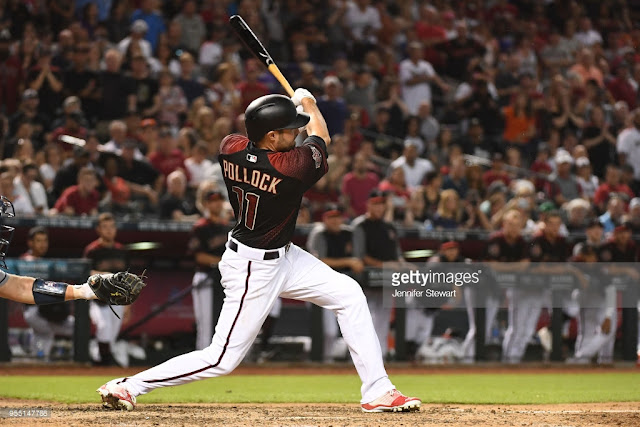 A.J. Pollock has gotten off to a monstrous start in a breakout 2018 season, as he currently leads the National League in Slugging (.677), OPS (1.038) & WAR (2.2), is second in HRs (11) and RBIs (31), is hitting a cool .308 and has also added eight stolen bases.  He is the perfect combination of speed, defensive prowess and power – everything that the Yankees see in Brett Gardner – only worlds better.  Pollock is an emerging star who has finally been able to put all of his talent together in 2018.  As of today, he has to be considered an MVP candidate alongside Harper.

The Yankees clearly value what Gardner currently brings to the table as a complement to the power hitting Aaron Judge and Giancarlo Stanton and Pollock would be able to provide all those same attributes, and assuming he can stay healthy, at a much higher level of production.  Pollock could slot in perfectly atop the lineup ahead of Judge & Stanton and he's capable of playing any of the three outfield positions at an elite level (currently sporting MLB's 13th-best UZR/150 of 9.9 and second-best DRS of five).

It should be said, however, that Pollock is a bit older than Harper, currently 31 to Harper's 25, and sports an injury history, all of which may ultimately disinterest the Yankees.  With an MLB leading 48 HRs from players 28 and under at this point, the Yankees are clearly committed to going, and staying, young.

Should the Yankees choose to pursue Pollock this Winter, he can probably be had at a similar contract to those of similar aged Charlie Blackmon (six years, $108 million) or Lorenzo Cain (five years, $80 million) as opposed to the monster contract in excess of $400 million Harper is expected to garner.  The fiscal savings of such a decision could be repurposed on pitching needs, particularly in the starting rotation as well as an early extension for Didi Gregorius.

So, what do you think, Yankees fans? Can you see yourself getting on board with the Yankees pursing A.J. Pollock, perhaps on something in the neighborhood of a three-year, $60 million deal?  Personally, I don't see the need, with Judge, Stanton, Ellsbury, Aaron Hicks and the kids all in tow for next season, but I've certainly been wrong before on things like this.  Did any of us think the Yankees would acquire Stanton this past offseason?  Jon Heyman of FanRag Sports currently has the Yankees at nine-to-one odds of signing Pollock.  Leave your comments below with your thoughts!