By Matthew Luzzi - June 12, 2018
The Yankees and Nationals are among MLB’s elite, as both are likely candidates to represent their respected leagues in the Fall Classic, and the two will meet this week in the Bronx for a quick two game set, hoping to have some better luck with the weather than they had in DC. While we don’t know if the Yanks will avoid the rain this week, we do know that they are dodging some major bullets on the field. Washington’s ace Max Scherzer and tricky lefty Gio Gonzalez both pitched over the weekend and will not be making it to the mound in the Stadium, while Stephen Strasburg had to leave his start Friday with an injury landing him on the D.L, thus making him unavailable as well. Therefore the Yanks will not have to face any of the Nats big three, and it should make for some high octane offense for a well-rested Yankees lineup. 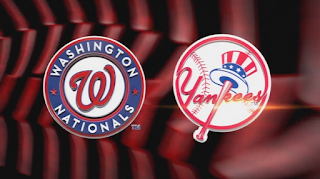 Tuesday night’s game will feature the big lefty C.C on the mound, who had an ugly 5.92 ERA in the month of May, but will be back on the mound with a bit of pep in his step this time out, as he looks to build off his brilliant performance in Toronto. Sabathia looked outstanding in that last start, allowing three hits over seven innings, having a rather sparkling pitch count, and furthermore, it was already the second time this season that he has gone seven strong in a start, something he only did three times all of last season. C.C will face a Nats lineup on Tuesday that should be tailor made for the soft contact king, as C.C should use the aggression of the Nats against them. For the Yanks offense, Aaron Judge should be back in the lineup after having Sunday night off aside from the pinch hit at-bat.

On the mound for the Nationals is one of the best “number four” pitchers in baseball in Tanner Roark, a veteran who has had himself a stellar season despite the lack of run support he has received. Roark has gone at least five innings in all of his twelve starts this season and has given up three runs or fewer in nine of those starts. Sporting an impressive 1.10 WHIP, it shouldn’t be an easy night for the Yanks offense, facing a tough vet who most of the lineup has never faced. The Yanks that have faced Roark are Stanton, who is 8-33 with four home runs in his career against Roark, and Neil Walker, who has hits in five of his fourteen at-bats so don’t be surprised if he gets the start or at least an at-bat in this game.

C.C had the best start in the last series for just a day, because Sonny Gray outdid him the next night with his first scoreless outing as a Yankee. Eight innings with only two hits given up did not result in a win for Gray, but it did boost the confidence and showed everyone what kind of pitcher he has the capability of being. Gray will now face a far superior lineup to the Blue Jays however in Washington, who are a combined 7-32 career off Gray. Sonny will also need to get over his dislike of pitching in Yankee Stadium, as he will enter his start Wednesday with a 7.22 ERA in his six starts in the Bronx this season.

The Yanks will face Erick Fedde who will be making his fifth career start in the big leagues. Fedde is pitching due to Strasburg’s injury, and actually had a decent outing in his one start this year, going 5.2 innings while giving up three runs. Feede is a right handed pitcher and was the 18th overall pick back in 2014, and was graded as Washington’s fourth best prospect headed into the season. The Yanks should have some opportunities to score some runs this game, but as we have seen before (Jarlin Garcia with the Marlins): that is not always the case.

Players to Watch:
Miguel Andujar
We are in the middle of June, and Miguel Andujar leads the Yankees in batting average, hits, and doubles, providing a much-needed pick up for many struggling veteran bats. Andujar has been particularly hot in the month of June, with a .516 OBP and a 1.442 OPS. Andujar has still struggled a bit defensively, yet that is custom with almost all young players, and the way he has been hitting is not normal for a 23-year-old in his first full season, so the positives heavily outweigh the negatives with Miggy. Andujar will look to stay on fire and keep the bottom of the Yanks lineup the best in baseball.
Brett Gardner
It seems like it was just yesterday that many Yankee fans were calling for Brett Gardner’s head, who was struggling mightily through the first couple months of the season. People wanted Clint starting over him, some talked about how excited they were for Gardner to not be on the team next year. Well, those people have mostly vanished, because Gardy has been one of the best hitters for New York the past few weeks. Gardy’s average entering May 9th was .198, until he had the biggest game of his season against Boston, which included a triple off Kimbrel. Gardner is now hitting .263 and like Andujar, has picked up the slack for the struggling sluggers in this lineup. With both Nationals starters this series being righties, expect Gardner to start both nights.

Bryce Harper
The most dangerous hitter on the Nationals, and possible future Yankee, Bryce Harper has had another stellar season in the power category, yet his average is significantly lower than where it usually is. There has not been much difference in Harpers numbers on the road or at home, or even against lefties and righties, hitting under .240 in all four categories. Despite the low average of .228, Harper has still produced for the Nats, leading the N.L in home runs with 19, and posting a solid .360 OBP. Be weary of Harper breaking out for a big game during his short stay in New York.

It is always much more enjoyable to watch the Yankees face teams that you know will most likely be playing in October, and the Nationals are no exception. Despite not facing any of the Nationals three best pitchers over these two games, the Yanks should still face a stern test from the leaders of the N.L East. With Erick Fedde making the start Wednesday, we can expect to see a good bit of the Nats bullpen, which is by no means flashy, yet they have walked the fewest amount of batters in the N.L and are fifth in ERA. It should be an interesting two games in New York, and the Yanks should feel fortunate that they do not have to face Mad Max, who has been on a tear as usual.