By Shane Black - June 21, 2018
Two aces met in the Bronx today in Luis Severino and James Paxton. Neither had their best stuff and were hit early and often. The Yankees used two two-run blasts in the first inning to lead them to a 4-3 victory and sweep of the Seattle Mariners.

Luis Severino did not have his typical ace stuff today. He went 5.2 innings, giving up eight hits and three earned runs. A two-run homer in the top of the second from Kyle Seagar gave the M’s their first two runs. Severino got into trouble in the sixth, giving up three singles and allowing a run, ultimately leading to his departure from the game. David Robertson took over and went 1.1 innings unscathed.

The Yankee bats were hot early as they tallied four first inning runs behind two-run homers from Aaron Judge and Miguel Andujar, two “bloops and a blast” if you may. They threatened in the third, loading the bases for Austin Romine who struck out, unable to add more to the tally. From then on the Yankee offense did not do too much. Only one base runner reached second in the final five innings for the Bombers. 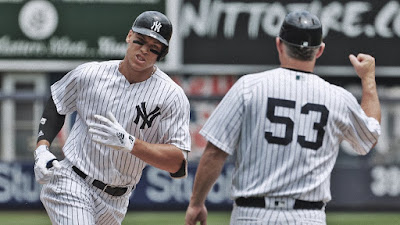 Dellin Betances took over in the eighth and looked like his former self. He retired the Mariners in order, striking out two of the three batters he faced. Aroldis Chapman came in in the ninth and recorded his 22nd  save of the season, clinching a Yankee sweep.

What’s Next?
The Yankees will pack their bags and travel down to Tampa Bay for a three-game set against the Rays, which is the start of a six game road trip. The Rays are 5-5 in their last 10 games.