By Shane Black - July 07, 2018
It is something that can be said about a lot of Sonny Gray starts in a Yankee uniform, it was short, and not sweet. Gray was pulled after just two innings of work leaving the Yankee bats 21 outs to try and overcome a 5-0 deficit. The bats did not come alive when they needed to (0-6 with RISP), and the Yankees fell 6-2 in the first game of a three-game set against the Blue Jays. 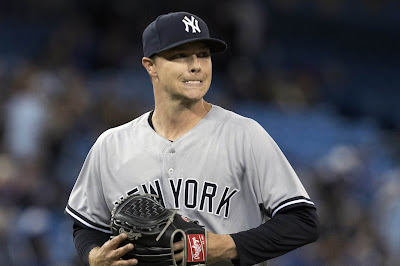 
Sonny Gray looked shaky on the mound from the start. After retiring the first two batters in the bottom of the first, back to back walks and a single had the bases loaded for the Jays. Gray was able to battle out of the bases loaded jam unscathed after striking out Russell Martin. He immediately found himself in more trouble after giving up a leadoff double to Randal Grichuk to start the bottom of the second. Back to back one out singles from Devon Travis and Curtis Granderson plated two runs, giving the Blue Jays a 2-0 lead. After a strikeout followed by a single, Gray gave up a 404-foot jack to Justin Smoak, increasing the Blue Jay lead to 5-0. Gray was pulled after 2.0 IP, allowing five earned runs on 62 pitches. Back to back horrendous starts from Gray.

The Yankees would spend the rest of the game trying to claw back into the game. A solo shot by Aaron Hicks in the third reduced the lead to 5-1. 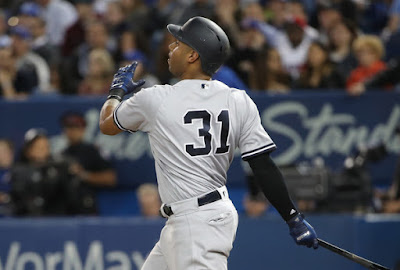 The Yankees had their chance to strike in the top of the fifth. Three of their first four batters in the inning reached base, loading the bases for Hicks. Hicks walked, cutting the lead to three while drawing Blue Jays starter Sam Gaviglio out of the game after 4.1 innings pitched. Joe Biagini came in to face Giancarlo Stanton. Stanton worked the count to 3-0 before swinging at two balls out of the zone and looking at one that sent him back to the bench. Didi Gregorius followed this with a hard line out to right. The Yankees blew their chance to capitalize in a big way.

After Sonny Gray’s two awful innings, David Hale came on to try and keep the game close. In his only two previous outings for the Yankees this season, Hale had given up two earned runs in five innings of action. Hale did his job and was fantastic tonight, giving the Yankees length they needed after Sonny’s short outing. He gave up just three hits in his first five innings of work, not allowing anyone to cross the plate. Hale got into some trouble in the bottom of the eighth, giving up two doubles that pulled him out of the game. Hale finished with a line of 5.2 IP, 5H, and 1ER (we all wish that was Sonny’s line).  Chasen Shreve came in to get the last out of the eighth.

The Yankees next threat did not come until the top of the eighth. After two quick outs, Miguel Andujar slapped his eighth hit in the last six games. Greg Bird followed with a walk, leaving a runner in scoring position for Austin Romine. Romine struck out looking, leaving the Yanks down to their last three outs.

The top of the ninth went one-two-three as Toronto handed the Yankees the loss in Game One of this three game set.

What’s Next: The Yankees roll into the weekend with two more games against their AL East foe, the Toronto Blue Jays. Yankees ace Luis Severino will take the bump in a late afternoon game in the Rogers Centre on Saturday (4:07pm first pitch). He will face the Blue Jays ace, and a guy that has been in speculation for a late July move to the Bronx in J.A. Happ. Happ is 10-4 with a 4.03 and 1.11 WHIP in the 2018 season.