By Andrew Natalizio - July 23, 2018
Following their rain-shortened two-game series split against the Mets at home this past weekend, the Yankees head down South for three days to face the Rays in Tampa Bay.  Tropicana Field has, in a way, been a house of horrors for New York, having gone just 4-9 at The Trop since the beginning of 2017 including an ugly three-game sweep just a month ago. The Yankees will begin play today at 63-34, five full games behind the first place Red Sox.  Tampa Bay comes in at 50-49, 19 games out of first and 9.5 games back of Seattle for the second Wild Card position. With trade rumors swirling for both squads and the teams headed in opposite directions, this series provides a key opportunity for the Yankees to get back on track and put pressure on Boston to once again close up the AL East race. 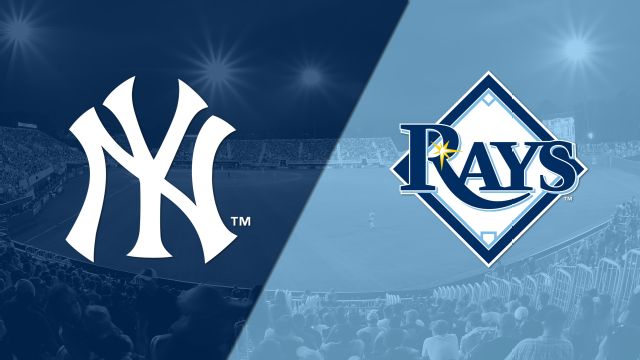 Luis Severino makes his first start of the second half following a disappointing outing in Cleveland ten days ago before his All-Star Game appearance.  Severino has been an absolute rock for the Yankees the entire season and has feasted on weaker opponents. The only hitter in the Rays’ lineup with any sort of success against Severino is Adeiny Hechavarria, who is 2-for-4 with a home run off the right hander. Except Sevy to shove in this one.

Hunter Wood will be making his second start of the season for the Rays as they continue to use their bullpen day strategy.  In seven appearances since being recalled on July 3rd, Wood has held opposing batters to a .184 average and has struck out 11 batters in 11 innings. Not a single hitter on the Yankees has faced Wood at the Major League level so it’ll be interesting to see how well they fare against him on Monday night. It’s possible Rays’ manager Kevin Cash only allows Wood to face the Yankees one time through the lineup before going to his long man for the middle innings, a strategy the Rays have frequently employed this year.

Game two of this series offers the closest thing to an exciting pitching matchup, as Masahiro Tanaka will be opposed by All-Star left-handed pitcher Blake Snell. Tanaka was scheduled to start on Sunday Night Baseball against the Mets, but with Luis Severino already down in Tampa Bay preparing for his Monday night start, the Yankees chose to keep their ace on schedule and instead push Tanaka back to Tuesday.  This will be Tanaka’s third start since he was activated off the disabled list and he has not recorded a decision in his prior two.  He was, however, very sharp in his most recent outing, holding a potent Cleveland Indians lineup to just two runs while pitching into the seventh inning. Kevin Kiermaier has owned Tanaka in his career, going 7-for-15 off him. Tanaka will need to avoid the longball and force the Rays into soft ground balls in this one.

Blake Snell has just five losses on the season, but two have already come at the hands of the Yankees. With that being said, expect Snell to come out strong in this one.  Gary Sanchez has hit very well against Snell in his career, going 4-for-11, with three of the four hits leaving the yard. This might be the perfect opportunity for Gary to get back on track in just his fourth game back off the DL.  Should the Yankees activate Gleyber Torres by this game, he also has a HR against Snell and will almost assuredly draw the start if he is active.

In the series finale, a Wednesday matinee before the Yankees return back to New York, Luis Cessa will make his third start of the season, and first since replacing Domingo German in the starting rotation. Cessa is not yet on the 25-man roster so the Yankees will have to make a roster move ahead of this game.  While Cessa’s name doesn’t exactly dial up much optimism amongst Yankees fans, the right-hander did look very good in his last start against the Orioles, going six scoreless innings while only allowing three hits.  Following his demotion back to Triple-A Scranton/Wilkes-Barre, Cessa backed up his start at Baltimore with two dominant starts for the RailRiders, pitching a combined 13 innings, allowing only a single earned run and striking out 14. This will be his best opportunity to finally stick at the MLB level if he can succeed in place of German.

Former Yankee Nathan Eovaldi will make his eleventh start of the season and second against the Yankees.  Eovaldi has been very hit and miss this season, as each time he seems to have turned a corner with a strong start, he backs it up with a dud. More or less the same thing we experienced when he was in pinstripes for two seasons.  Didi Gregorius has had Eovaldi’s number, going 5-for-9 off him with a home run.


Players to Watch – Yankees
Giancarlo Stanton: Stanton has been hot of late, slashing .343/.382/.557 in the month of July.  This is about the time last season when he went on his home run tear that ultimately propelled him to the National League Most Valuable Player award. If he even can come close to repeating his feats from a year ago, he can carry this team throughout the next month. Stanton has also been much better on the road this season, slashing at a .323/.389/.581 clip. This series presents an opportunity for him to put up some big numbers.

Greg Bird: Similar to Stanton, Bird has started to heat up in recent weeks.  Following his abysmal start to the season after starting the year on the disabled list, Bird has a .300/.375/.600 slash line to his name over his past 11 games dating back to July 7th.  In that time he has also driven in 14 runs and the Yankees desperately need more left-handed production in the righty-dominated lineup.


Players to Watch – Rays
Adeiny Hechavarria:  It’s no secret at this point, by Hechavarria has become a major thorn in the Yankees’ side.  The veteran Rays’ shortstop has a career slash line of .320/.340/.515 against New York with four home runs – his most off any opponent.  He also sports an impossibly high .433 BABIP so perhaps some hard-hit balls will start finding gloves.  Regardless, Yankees need to do a better job of containing the relatively soft-hitting shortstop and not allowing him to be a difference maker.

The Yankees will return home following the short three-game road trip, but this series is the start of the team's easiest stretch of games on their calendar all season, with games against Tampa Bay, Kansas City, Baltimore, Detroit, Chicago (AL), Texas, Toronto & Miami all on tap.  Aside from four games at Fenway the first weekend of August, 35 of the team's next 39 games are against teams just at or below .500.  New York has struggled against inferior competition in the season's first 97 games, but now is the time to take care of business and claw their way back into the thick of the race for the American League East division crown.