By Andrew Natalizio - August 11, 2018
A massive late-game home run from the American League’s Rookie of the Year favorite propelled the Yankees to a huge 5-3 win over the Texas Rangers. 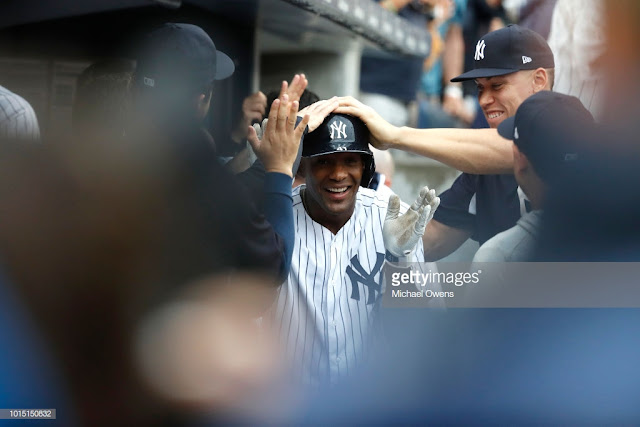 The Yankees came into today’s game coming off one of their worst losses of the season, a 12-7 defeat on Friday night against these same Rangers.  The team turned to recent acquisition Lance Lynn to right the ship and get the team back on track as they continue to make their push for the top American League Wild Card spot – and to a lesser extent – the American League East crown which seemingly becomes more and more out of reach with the way the Red Sox continue to play.

Lynn was on again in this one, going five strong innings, allowing only five hits and one earned run while striking out eight.  He has been everything the Yankees could have asked for at the back of their rotation.

As for the offense, a Giancarlo Stanton solo home run and Greg Bird RBI double in the first inning gave Lynn a quick lead, but they would quiet down for the next five innings as Drew Hutchison settled in.  They would add a third run in the sixth after Bird doubled off Hutchison and then Neil Walker stroked an RBI single down the line off reliever Jeffrey Springs.

David Robertson pitched a clean sixth inning in relief of Lynn, but Zach Britton worked himself into a mess in the seventh after retiring the first two batters he faced.  Britton would ultimately load the bases and then issue a bases loaded walk before giving way to Dellin Betances.  Betances was able to strike out Jurickson Profar to retire the side, but not before allowing a game-tying balk which allowed Rougned Odor to score from third.

The big moment in this game then game in the bottom of the seventh against former Yankee Chris Martin.  Stanton ripped a single to start the frame before Andujar crushed a go-ahead two-run home run to right field to the give the Yankees a 5-3 lead.  Betances was dominant in the bottom of the eighth to carry that lead into the ninth.

In came Aroldis Chapman who had to battle a driving rain the entire inning.  Isaiah Kiner-Falefa led off the inning with a walk as Chapman could barely grip the ball in the rain.  Shin-Soo Choo would strike out and Odor punched a single between third and short to give the Rangers two men on with just one out.  Chapman got Elvis Andrus to weakly pop up in the infield for out number two, but then plunked Adrian Beltre with two strikes to load the bases.  Chapman would push the count full against Profar, but was able to record the final out, and the save, by blowing a fastball by the Rangers' third baseman.

For the Yankees, it was their fifth win in the last six games and keeps them eight games back of the first place Red Sox who won again today in Baltimore.  They'll go for the series win tomorrow afternoon with CC Sabathia (6-4, 3.49) on the hill against Martin Perez (2-4, 6.15). First pitch scheduled for 1:05pm but rainy weather is again in the forecast.