By Chase Seibold - August 27, 2018
The Yankees have gotten hot again. They just swept a four game series with the Orioles, and have won eight of their last nine games. The Red Sox on the other hand have lost six of their last eight, and are currently only six games ahead of the Yankees. The Yankees are now back in the Bronx, and will be playing the White Sox, trying to keep some pressure on Boston in the AL East. The White Sox are in fourth place in the AL Central, and are 28 games under .500. The Yankees already swept the White Sox earlier this month, and that should be the goal again against one of the worst teams in baseball. 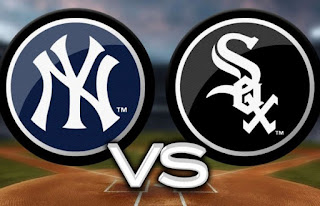 Game One: Monday, August 27 at 7:05 on YES and ESPN
Masahiro Tanaka (9-4, 3.90 ERA) vs. Carlos Rodon (5-3, 2.71 ERA)
In game one the Yankees will give the ball to Masahiro Tanaka. His last start was against the Marlins, and he was very good in it. He threw six innings of one run ball, striking out four, and allowing just four hits. Tanaka will be happy he is throwing against the White Sox. In his career he has started five games against them, and has a record of 4-0, with an ERA of 2.23. The only member of the White Sox with good numbers against Tanaka is Jose Abreu, who is 4-12 with two doubles against him.

Carlos Rodon will be the one to counter Tanaka. Rodon has emerged as the White Sox ace this season, and if he had enough innings to qualify, he would have the sixth best ERA in the AL, Rodon has been dominant for a few months now. He hasn’t lost a start since June, and in the month of August he has pitched to a 1.61 ERA. The good news for the Yankees is he is pitching in the Bronx. Rodon’s ERA on the road this year is 3.65, compared to a 1.71 ERA at home. The 25-year-old who has a career 3.72 ERA also has a career ERA of 7.11 against the Yankees. The Yankee with the most at-bats against Rodon is Brett Gardner who is 3-9 off him in his career.

Game Two: Tuesday, August 28 at 7:05 on YES
Lance Lynn (8-9, 4.84 ERA) vs. James Shields (5-15, 4.59 ERA)
Lance Lynn will be on the bump for the Yankees is game two. Since Lynn has come to the Yankees his ERA has been 3.81 which is way better than his 5.10 ERA with the Twins, but he is trending in the wrong direction. In his last 9.1 innings he has allowed ten runs. Because of his time with the Twins he has already pitched three times against the White Sox this year, and has done well, composing an ERA of 2.95. Wellington Castillo is Lynn’s nemesis as he is 9-15 with three home runs against him.

James Shield will be pitching for the White Sox in the second game. Since signing a 4 year-75 million dollar deal with the White Sox, he has not been good. Through almost three years of that deal, he has a -1.1 WAR, and has an ERA of 5.40. This has been his best year with them though, he has a 4.59 ERA this year, and has pitched at least six innings 22 times. In his career against the Yankees he is 12-16 with a 4.08 ERA. No Yankees have good numbers against Shields. For example, Aaron Hicks is 1-8, and Giancarlo Stanton is 3-14.

Game Three: Wednesday, August 29 at 7:05 on YES and MLBN
CC Sabathia (7-4, 3.30 ERA) vs. Reynaldo Lopez (4-9, 4.66 ERA)
Pitching for the Yankees in the third game will be CC Sabathia. His last start was his first one off the D.L. and he pitched well, allowing two runs in six innings. If it wasn’t his first start off the D.L. Boone might have let him go into the seventh inning because he only threw 80 pitches. In his one start against the White Sox this season Sabathia pitched 5.2 innings, allowed one run, and struck out twelve. In 36 career starts against the White Sox CC is 19-6 with an ERA of 3.73. Sabathia has had a lot of success against White Sox slugger Jose Abreu who doesn’t have a hit against him in nine at bats.

The White Sox will give the ball to Reynaldo Lopez Wednesday night. In his third season he has pitched to a 4.66 ERA, and over his last three games he has an ERA of 8.53. It will be important that CC holds the White Sox to just a few runs, because when the White Sox give Lopez between 0-2 runs he has been way worse, and pitched to a 5.30 ERA. In his lone start against the Yankees this year he gave up one run while pitching seven innings, which was one of his best starts of the year. In his first start the Yankees only run came on a Miguel Andujar homerun.

Players to Watch
Yankees:
Luke Voit:
In the Yankees four game sweep of the Orioles Voit made sure he was known. In the series he was 7-11 with three home runs, four runs scored and seven runs batted in. He is getting the start in game one hitting cleanup, which shows how highly the Yankees think of him now. If Voit is able to have another big series, the struggling Greg Bird could start to have trouble seeing playing time.

White Sox:
Adam Engel:
Last series against the Yankees Engel robbed two home runs, and one of them was from Greg Bird, which is taking from the needy. Engel is hitting over .333 against all of the Yankees starters this series, even though he doesn’t have many at bats against them. Last series Engel hurt the Yankees with his glove, hopefully this series he won’t do the same with his bat.
Article by: Chase Seibold