In the wake of sought-after free agent pitcher Patrick Corbin signing with the Washington Nationals today, the Yankees need to pivot quickly, and the best option might just come in the form of an old friend.


Nathan Eovaldi, after being acquired by the Boston Red Sox this past Summer, put the entirety of his skillset on display as he was a key cog in the Red Sox’s rotation as they went on to win the World Series.  After being acquired from Tampa Bay at the non-waiver trade deadline in July, Eovaldi went 3-3 in 12 games (11 starts) with a 3.33 ERA.   Where he shined the most, however, was in the postseason.


In his first ever career postseason start, against our New York Yankees no less, Eovaldi dazzled over seven innings of one run ball.  He would make another start in the ALCS against the Astros, again picking up the win over six strong innings, allowing only two runs, before making four relief appearances the rest of the playoffs.  All in all, Eovaldi’s 2018 postseason line looks like this: 2-1, 1.61 ERA, 0.806 WHIP over 22.1 innings.

Maybe most importantly, Eovaldi is Boston’s number one target in free agency this Winter, seeking to lock up the young right-hander for another three-to-five years after displaying so much promise after his acquisition.  Should the Yankees swoop in and steal him out from underneath the Red Sox, the effects would be twofold.  Not only would signing Eovaldi keep him out of Fenway Park for the foreseeable future, but the Yankees would also be adding another frontline starter to pair with Luis Severino and James Paxton, giving the team a lethal trio atop their rotation.

Does signing Eovaldi come with question marks?  Of course it does.  Few Yankees fans will forget his struggles in Pinstripes in 2015 and 2016 before ultimately requiring Tommy John Surgery due to another torn UCL in his throwing elbow, an injury which ultimately led him to being non-tendered.  However, Eovaldi looks to have made a full recovery and looks as strong as ever.  More importantly, he looks to be commanding his secondary pitches better than ever.

The Yankees liked what they were seeing from Eovaldi late in 2016, just before his injury, and then never got the chance to see him fulfill the promise they saw in him.  Eovaldi, seemingly out of the blue during a World Series presser, even credited Yankees’ pitching coach Larry Rothschild for helping him develop.  “Working with Larry, he helped me, really, with all of my pitches and just how to attack the hitters. He prepared for the games really well and I took a lot away from [working] with him.”

Said Rothschild about Eovaldi, “He was great to work with, always willing to make adjustments and try different things.  He had great arm strength, obviously, but just the type of person he is I think sticks out. Most people that are around him would say the same thing. He’s always positive. I don’t know if he ever has a bad day. A lot of fun to be around and was a really good teammate for everybody.” (Credit: Newsday). 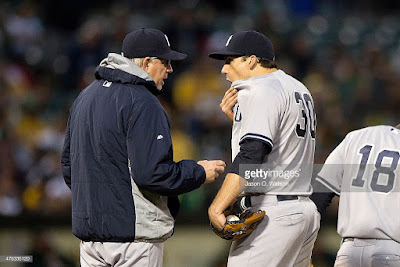 The Yankees offer to Patrick Corbin was reportedly five years, $100 million – a $20 million AAV.  Should the Yankees offer Eovaldi something in that neighborhood, but maybe one or two less years?  Would that be enough to steer him away from the rival Red Sox?

Brian Cashman and his staff will certainly do their due diligence, as they do with all free agents, but I wouldn’t be shocked if the Yankees offered Eovaldi a deal in the range of three years, $54 million.  Am I falling into another 2010-Javier Vazquez-second-tour-of-duty trap? Perhaps.  But I always believed Eovaldi could be a top-of-the-rotation starter based on his raw stuff, even if the results never manifested themselves.

If the Yankees decide such a move is too risky, expect them to perhaps pivot to JA Happ or the trade market, while allocating the funds they had set aside for Corbin and using them on another marquee free agent – perhaps even Manny Machado or Bryce Harper.