By Christian DeMoro - April 23, 2019
On the heels of a nerve-wracking Easter Sunday victory, the Yankees head to the west coast to open up a three-series road trip - the first being a four-game set against the Los Angeles Angels. Winners of five of their last six and two straight series, the beaten down Yanks will look to ride their momentum forward as the returns of lineup stalwarts Gary Sanchez and Giancarlo Stanton inch closer. 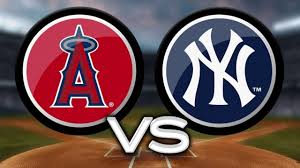 The Angels, who stand at 9-13 and at the bottom of the AL West, have not won a series since April 10. Although they boast the consensus top player of this generation in Mike Trout, the Halos again appear non-competitive and seem to be heading toward a fifth consecutive season without a playoff appearance. It’s a perfect opportunity for the Yanks to take advantage of a lowly opponent, something they’ve largely been unable to do so far this year, and head to the Bay Area on a high note.
Game One, 10:07 PM EST, J.A. Happ (0-2, 7.23 ERA) vs. Matt Harvey (0-2, 9.64 ERA)
2019 has not been kind to J.A. Happ. He heads into his fifth start still in search of his first win, after a dreadful stretch that has left him with an ERA north of seven and an ugly 2.9 HR/9. There is, however, a cause for optimism: he tossed 6 ⅓ innings of three-run ball last week against the Red Sox, a quality start albeit a no-decision. Happ will look to turn the corner (no pun intended) as he takes the ball in the series opener.
On the hill for the Angels will be the once-formidable former Mets ace, Matt Harvey. Harvey is a shell of the pitcher he once was (likely attributed to the dreaded thoracic outlet syndrome) - he holds a 5.71 ERA in the 359 innings since his stellar 2015. Dubbed ‘The Dark Knight’ during his time in New York, Harvey will also attempt to correct his early-season struggles and at least return to his respectable 2018 form.
Game Two, 10:07 PM EST, Jonathan Loaisiga (0-0, 3.86 ERA) vs. Chris Stratton (0-1, 7.00 ERA)
Loaisiga will return from Scranton to make a spot start in game two, a decision Aaron Boone made in order to give each starter an extra day off. This will be his third of the season - he opened the year as the Yanks’ fifth starter during CC Sabathia’s rehab, though neither of his starts went past the fourth inning. He’ll get another look early on as Boone strategizes, preparing to play six games under National League rules following the current series.
Stratton, like most Angel starters to this point, has yet to come across a win in 2019. A member of the Giants’ rotation last season, he’s looking to move past a rough start on Thursday in which he surrendered six runs over five innings. D.J. LeMahieu is the only member of the Yankees to have faced Stratton before - he’s gone 4-for-12 with three RBIs.

Game Three, 10:07 PM EST, Domingo German (3-1, 2.37 ERA vs. Felix Pena (0-1, 4.15 ERA)
German will seek to continue his hot April as he toes the rubber on Wednesday. He’s been everything the Yanks could’ve hoped for in place of their fallen ace - through three starts, he has yet to go less than five innings or surrender more than three runs. After taking a loss Thursday (nonetheless a quality start), he’ll look to get back on the good foot here in Anaheim.
The 29-year-old Pena has shown flashes throughout his career, but hasn’t exactly been able to piece it all together. In and out of the Halos’ rotation over the past few years, he’ll enter with a 4.15 ERA - pretty reflective of his career body of work (4.40). Pena should keep the Angels in it, but he served up two home runs in his last start (five innings) and that could be his kryptonite against a Yankees team with Clint Frazier and Luke Voit atop the lineup.
Game Four, 9:07 PM EST, CC Sabathia (1-0, 0.00 ERA vs. Trevor Cahill (1-2, 5.47 ERA)
In two starts since returning to the mound, Sabathia has yet to surrender a run, allowing just four hits and striking out 10 over 10 frames. Milestone watch: Sabathia is just six strikeouts from becoming the 17th pitcher to achieve 3,000, and only the second to do it in Pinstripes. History could very well be upon us in the series finale as Sabathia goes for his third straight quality outing.

Though the numbers might not suggest it, Cahill, the Angels’ Opening Day starter, has actually been their most effective starter to this point. The 31-year-old resurrected his career last year in the A’s rotation, pitching to a 3.76 ERA over 110 innings. It’s been a slow start for Cahill, and he’s especially struggled during his last two starts, during which he’s surrendered nine runs in just 8 ⅓ innings.
Article by Christian DeMoro
Follow @ChristianDeMoro Follow @BronxBomberBall
CC Sabathia Christian DeMoro Domingo German JA Happ Jonathan Loaisiga Los Angeles Angels New York Yankees Series Preview