The Yankees lose another series at home, losing the rubber game to the White Sox


After one-hitting the White Sox the day prior, the Yankees looked to win their second in a row and win the series during Sunday’s rubber game. Unfortunately for the Yanks, the home run ball came back to bite them, leading to a 5-2 loss.

Masahiro Tanaka toed the rubber for the Yanks to start this game and he came out firing. After striking out four of the first five batters he faced, Tanaka looked poised to continue his dominant start to the season. Unfortunately for the Yankees, he just couldn’t get it done. 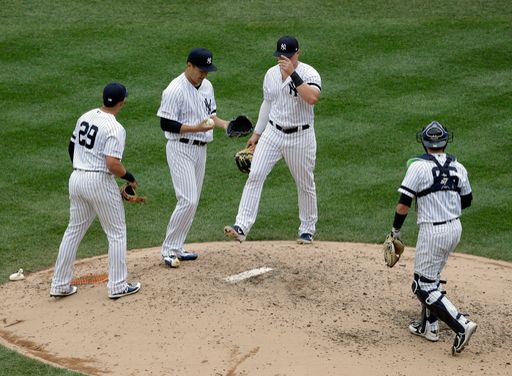 For the White Sox, Carlos Rodon manned the bump. Rodon has had previous success against the Yankees and looked to continue that against a rather injury riddled lineup.

The Yankee offense got off to a quick start in the first inning thanks to a one-out walk by Aaron Judge and a two-out RBI double off the bat of Luke Voit. Later in the third inning, Mike Tauchman came around to score on an RBI single from Aaron Judge, extending the Yankee lead to 2-0.

After three solid innings from Tanaka, the top of the fourth inning is where the game got away from him. After Judge threw out Yoan Moncada at second while he attempted to stretch his hit into a double, Tanaka allowed the next three batters to reach. With the type of luck the Yankees have had this season, Tim Anderson would go on and hit his first career grand slam, giving the White Sox a 4-2 lead.

The White Sox knocked Tanaka out in the fifth inning, after he quickly loaded up the bases for the second straight inning with nobody out. Aaron Boone went to bullpen and brought in Luis Cessa in a very difficult situation. Luckily for the Yankees, Chicago would only score one run on a sac-fly by Jose Abreu.

After a quick start by New York’s offense, the bats would cool off thanks to Carlos Rodon who went a solid six innings, allowing only two runs on three hits. He kept the Yankees off balanced for most of the day and even retired nine in a row at a point.

With a poor start from Masahiro Tanaka and a rather lackluster offensive output, the Yankees lose another series at home. To start the season the Yankees are now 3-6 in the Bronx, something nobody saw coming this season. Now having lost five of their last 6 games, the Yankees look to welcome in another surprisingly lackluster team, the Boston Red Sox.

After an off day on Monday, the Yankees open a two-game series with the Red Sox. The Yankees have James Paxton taking on Chris Sale on Tuesday. First pitch is scheduled for 6:35 EST.