Heading into a three-game Memorial Day Weekend series against the Kansas City Royals, the Yankees are in first place in the A.L. East.  They are two and a half games ahead of the Tampa Bay Rays.  They have won six of their last seven games.  They swept the Baltimore Orioles in a four-game set, winning the last of the four games on a run driven in by an Aaron Hicks walk.  Players, the next of which will be James Paxton, are returning from the Injured List.  Not to put too fine a point on their situation, but, they are currently a pleasure to watch. 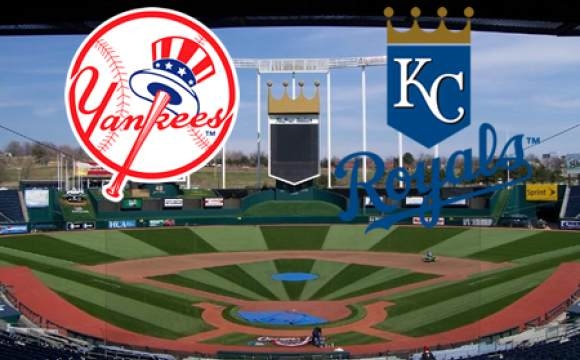 The only piece of bad news that the Yanks have received in recent days is the announcement of CC Sabathia’s knee inflammation that places him on the 10-Day IL.  However, his spot in the rotation dictates that he wouldn’t be pitching in Kansas City regardless of his injured status.  Instead, the matchups will read as follows:


Initially, the schedule for pitching matchups indicated that the Yankees’ starting pitcher was undecided, and then, Chad Green appeared on the schedule. It's understandable why Aaron Boone would need to go to a bullpen pitcher as an opener, in the absence of Paxton and Luis Severino.  The Yankees used this same strategy for this slot in the rotation last Sunday against Tampa Bay and were able to come away with the win.  The 2019 version of Green has failed to produce to the point that he spent time playing for SWB.  He's a far cry from the Green of season's past, and it's difficult at best to predict if he has the chops for this job.  In his last time out as an opener on May 19, he made it through 1.2 IP, which is typical for an opener -- but in just that short appearance, he was charged with two runs on three hits, two of which were home runs.  In short: the bullpen better be ready to go, and early.

However, the Yankees' offense shouldn't have any issue keeping Jakob Junis on his toes.  In Junis’ last three starts, he was charged with the loss.  He’s allowed a total of 35 earned runs on the season.  The Yankees are, lifetime, 26-for-83 against Junis, with a combined average of .313.  While that statistic includes some of the Yankees who are still on the Injured List (including Giancarlo Stanton and Didi Gregorius), Hicks is 5-for-5 against Junis, Gleyber Torres is 3-for-7, and even Brett Gardner is 3-for-10.  If the Yankees’ offense continues to hit with the same power that they’ve shown their fans and coaches over their recent 11-game stretch, they won’t -- and shouldn’t -- have any problem with Junis.

Game Two, Saturday, May 25, 2:15PM
JA Happ (3-3, 5.16 ERA) vs Danny Duffy (3-1, 3.45 ERA)
Just when it looked like JA Happ was due to find his form and make a comeback, he choked. Not only did he choke, but he choked against the last-place Baltimore Orioles.  The Yankees offense’ and bullpen, thankfully, were able to combine their resources to make a comeback and win the game, but that win (either on paper or otherwise) cannot be credited to Happ in any form.  He survived only 3.2 IP and allowed nine hits, six earned runs, two home runs and a walk.  The only reasonably good news in this situation is that the Royals are 17-for-78 lifetime against Happ, totaling a .218 average.  So, if there’s a chance for Happ to rise from the ashes, the odds are decent.  However, there’s truly no telling with 2019 Happ.  The offense, luckily, has been hitting well enough that they can (hopefully) make up the losses if Happ, once again, doesn't have his best stuff.

Danny Duffy, however, is on a winning streak.  He’s won three of his last four starts, striking out at least five each time and staying in the game through at least 5.0 IP.  He has allowed one home run, seven walks and seven earned runs. So, based on those stats alone, the Yanks’ offense needs to be ready for Duffy. Not to mention, the Yankees are, lifetime, 19-for-93 against Duffy, totaling a combined average of .204, not so promising.  Unfortunately, this game is one of those situations in which the Yankees have the weaker starting pitcher on the mound, and the offense may have to make up for that fact.

Game Three, Sunday, May 26, 2:15PM
Domingo German (9-1, 2.60 ERA) vs. Jorge Lopez (0-5, 6.29 ERA)
Domingo German continues to WOW.  He’s stepped into the ace role in the Yankees’ rotation in the absence of Severino.  He is the first nine-game winner in MLB following a win in Baltimore.  He’s won his last six starts, possesses a beastly 2.60 ERA. and has recorded 57 strikeouts on the 2019 season.  So, it’s safe to say that he’ll continue the streak.  However, there is one important -- and not so positive -- stat to note here: German’s only loss this season came on April 18 at the hands of the Royals.  While a loss is a loss, German still lasted 6.0 IP during that game, and allowed just three runs on six hits.  German definitely didn’t pitch poorly that start, and the Yankees’ offense could have scored more than the lone run they were able to throw up in that game.  Even an ace can run into some bad luck, and based on the fact that the Royals are a combined 6-for-25 against German, it seems bad luck was the only problem at play on April 18.

The other piece of good news here is that Jorge Lopez is carrying the ultimate losing record, without recording a win on the 2019 season.  A 6.29 ERA is beyond nothing to write home about.  In Lopez’ last appearance against the Yankees on April 21, he made it through 7.0 IP and was not charged with the loss.  However, he still allowed five of the seven Yankees runs on just eight hits, one of which came at the hands of a home run.  He also threw 106 pitches.  Aside from giving Lopez struggles in their last meet up, the Yankees offense is collectively 6-for-22 against him.  That number may not seem too flashy; however, only seven of the current Yankees (none of who are on the IL) have faced Lopez.  Taking that fact into consideration, the number can only grow from here.
From the offensive side, the Yankees should have no problem taking on the 17-32 Royals, who are in last place in their division.  Collectively, the Royals' starting pitching is weak, and based on how the Yankees have been hitting the ball, they should have no problem hitting a weak pitching staff.  Their energy doesn’t look like it’s going to fizzle out anytime soon; Gleyber Torres is hitting .302 and has already logged 12 home runs.  Gio Urshela is hitting .336 and has been the offensive surprise of the season.  With a batting average of .316, Thairo Estrada went from not even knowing if he’d play in MLB this year to finding himself in the starting lineup on a regular basis.  Gary Sanchez can’t stop hitting home runs, already recording 15 on the season.

The fact that the Yankees are, once again, facing a last-place team certainly helps their cause, but I think that this team is truly up for any challenge.  Are there concerns (Happ... Green...)?  Of course.  Are there still injured players?  Absolutely.  But, I think there's still Yankees' victories to look forward to forward to this #MDW.