Previewing the final week of the 2019 Regular Season


Heading into their final five regular season games of the 2019 season, the Yankees have wrapped up most of their business, with just a few loose ends left over.  The Yankees just concluded their final regular season homestand this past week, taking two of three from both the Angels and Blue Jays, wrapping up their first AL East crown in seven years in the process.  The final homestand saw the Yankees hit the 100-win mark for the second consecutive season, the return of Luis Severino (who dominated in his two appearances) and Giancarlo Stanton, as well as the final regular season start for future Hall of Famer Carsten Charles Sabathia.  CC was honored with an emotional ceremony on Sunday afternoon, his last ever regular season game at Yankee Stadium.


It wasn’t all good news for the Bombers, however.  Domingo German was placed on the Commissioner’s Restricted List as the league investigates charges of domestic violence against the young right-hander.  German was one of the best starters for the Yankees all year, but now it appears that the team has lost him for the season, with an eventual suspension incoming that could also carry over into 2020.

With the AL East title clinched, and only home-field advantage left to play for in the season’s final week, the Yankees take to the road for two games against the Rays before concluding the 2019 season at Globe Life Park against the Rangers – the final three games ever to be played in that ballpark before the Rangers’ new stadium opens next year. 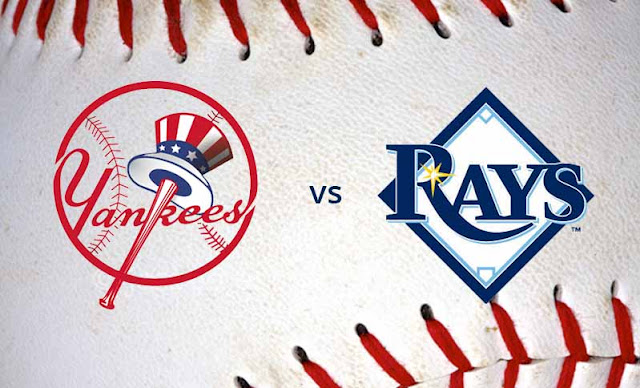 Aaron Boone has already stated that the Yankees will bullpen-day both games, so expect a lot of Jonathan Loaisiga, Nestor Cortes, Tyler Lyons, Chance Adams, Mike King, Stephen Tarpley and Ben Heller, with an appearance from CC Sabathia in one of the games.  While the Yankees still have the American League’s top overall seed to play for, it is Tampa who will be fighting for their playoff lives as they’ll enter Tuesday’s game either one-half game up, or one-half game back of the Cleveland Indians for the second and final Wild Card spot, pending the results of tonight’s game.  Like New York, Tampa has yet to name a starter for either game in this series, however, it won’t be Blake Snell who pitches on Monday night against Boston.

What to Watch For:

The Yankees will conclude the 2019 campaign with three games at Globe Life Park in Arlington, Texas – the final games ever to be played here.  The Yankees took two-out-of-three from Texas earlier this month at the Stadium.   Assuming the American League’s top spot is still up for grabs, New York won’t fully punt on these games, but expect Boone to use a lot of the bench players to close out the season and keep his starters healthy going into the ALDS.  Texas, with nothing else to play for other than pride, will look to send Globe Life out with a few wins in it’s swan song.


What to Watch For: